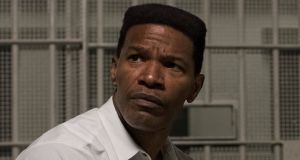 JUST MERCY ★★★★☆
Directed by Destin Daniel Cretton. Starring Michael B Jordan, Jamie Foxx, Rob Morgan, Tim Blake Nelson, Rafe Spall, Brie Larson. 12A cert, gen release, 137 min
Just Mercy is a splendidly old-fashioned legal drama with a real world Atticus Finch at its centre. Comparisons to To Kill a Mockingbird are apt and obvious. Upon arriving in Monroeville, Alabama, every white resident seems to ask the hotshot lawyer “from up North” (Jordan): “Have y’all been to the Harper Lee Museum?” There is much muttering when he takes the case of an African-American man (Jamie Foxx) wrongfully imprisoned for the 1986 murder of a white woman and sentenced to death. A gripping, dazzlingly acted and – yes – important drama unfolds. TB

There are obvious comparisons between Waves and the similarly giddy and sneakily powerful teen soap Euphoria. Shults’s compellng third feature begins with Tyler (Harrison Jr), an over-achieving high school wrestler with a pushy dad and pregnant girlfriend. The heady atmospherics and soapy plot hooks coalesce into a fever dream and a tragedy. Suddenly the film changes gear. The second half concerns Tyler’s unassuming younger sister Emily (Taylor) and a blossoming romance with a classmate (Hedges). It’s a softer, emotional reckoning, one that is as cathartic and peaceable as the opening is euphoric and dangerous. Full review TB

Malick returns to form (if not his very best form) with this study of the Austrian martyr Franz Jägerstätter. Diehl brings dignity to the farmer who refused to sign an oath of allegiance to the Nazis in a film that showcases the director’s favourite techniques. Dialogue is as often voiceover as it is conversation. Scored to surging chords, the movie is alternately inside and outside the consciousness. It’s beautiful throughout, although the argument becomes repetive in the last hour. Full review DC

Entertaining if lightweight examination of the sexual harassment scandal at Fox News. Bombshell stands up for the likes of Megyn Kelly and Gretchen Carlson who, as played by Theron and Kidman, come across as intelligent professionals hemmed in by institutional prejudice. The film itself is not so smart. It would be overstating the case to argue that Bombshell doesn’t have an idea in its pretty little head, but we can certainly argue for one more irony in that title. Full review DC

The Safdies follow up Good Time with a grim, blackly comic thriller concerning a cash-strapped jeweller trying to flog a rare jewel before the bookies string him up. Sandler uses his talent to irritate for good in a film that never soothes when it can grate. Darius Khondji’s camera apes the spotty fuzz of aged 16mm. And the sheer noise of the thing? All this invites such total immersion in New York’s Diamond District that the picture takes on an anthropological flavour. Astonishing. Full review DC