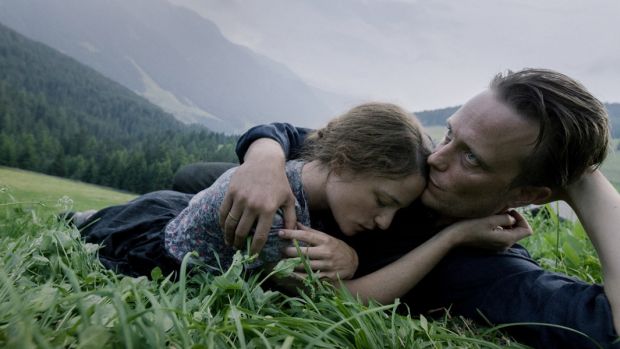 If nothing else, Terrence Malick has, over 40 years, created a unique aesthetic that no director would dare imitate. It’s as personal to him as a fingerprint or handwriting. Mobile cameras, often with wide-angle lenses, drift among characters moving in a Brownian motion that only accidentally nudges the story forward. Dialogue is as often voiceover as it is conversation. Scored to surging chords, the movie is alternately inside and outside the consciousness,

All this became unbearably precious in “spinning lady” films such as Knight of Cups or Song to Song, but, for good or ill, A Hidden Life, the story of a Christian martyr during the second World War, brings us back to where we left Malick with The Tree of Life.

Exhaustingly beautiful, serious of purpose, the film knows where it’s going and, when it gets there, it stays for a very, very long time. A Hidden Life risks inducing Stendhal syndrome with its early overload of beauty. It risks something closer to narcolepsy in its repetitive final act. But even then, the singularity of Malick’s approach repels irritation.

August Diehl is upright and intense as Austrian farmer Franz Jägerstätter. The opening sections offer us an overpowering depiction of life in the foothills. Malick is not one for gritty reality (even the prisons here are clean) and, with the neat chalets and crisp aprons, he risks nudging us into Sound of Music territory.

The plot has something of that musical too. Jägerstätter is called up and, first time out, serves grudgingly until the fall of France. When the Nazis come calling again, however, his Christian conscience begins to prick.

For the film’s first hour and a half, we drift agreeably from mountain to pasture to town square while the actors employ the same deadened tone to each other and to themselves. Fani (Valerie Pachner), Franz’s wife, is largely supportive, but the neighbours bristle at his refusal to comply with the Nazis. The moral issue is more complex than that summary suggests.

Towards the close, it becomes clear that the Nazis will allow him to serve in a non-combat role if he will sign the oath of allegiance. Even his supporters end up begging him to cross his fingers and make the mark. Germans shout at him in German and speak less angrily to him in English (no critic has yet made sense of this odd convention, and Malick ain’t talking).

The dilemma is similar to that towards the close of Martin Scorsese’s Silence and, as there, the director fails to make sense of it. No caring God would, surely, want a man to die simply for telling a white lie in an affidavit. Both Scorsese and Malick seem to assume a latent religious faith in the observer. No bridge is made with the contemporary godless moviegoer.

For all that, the sheer cinematic sweep of A Hidden Life will keep most patient viewers on board. The Malick aesthetic is sometimes infuriating, but we’ll miss it when it’s gone.