Bombshell review: This film doesn’t have an idea in its pretty little head 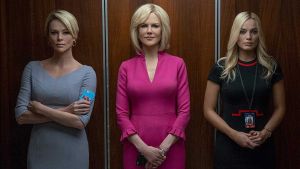 Appropriately for a film set within the Murdoch empire, the title has a sticky double-meaning that would have appealed to Kelvin MacKenzie, former editor of the Sun, during his high period.

Jay Roach’s film is, you see, about sexual harassment at Fox News. As Alan Partridge would confirm, the revelations landed like the “bombshell” of journalistic cliché, but the word — with an assumed “blonde” before it — also gets at a patronising caricature of the victims. Nobody refers to male anchors in these terms. The disproportionately fair-haired newsreaders at Fox were, however, rated on their looks before being assessed for their intelligence.

Bombshell stands up for the likes of Megyn Kelly and Gretchen Carlson. As played by Charlize Theron (Oscar nominated for best actress) and Nicole Kidman, they come across as intelligent professionals hemmed in by institutional prejudice. The film itself is not so smart. It would be overstating the case to argue that, though engaging and nice to look at, Bombshell doesn’t have an idea in its pretty little head, but we can certainly argue for one more irony in that title.

Bombshell is just itching to twist the knife in the Fox newsreaders, but can’t quite allow itself the indulgence

It doesn’t help that the (almost entirely male) filmmakers are unsure what to think about their subjects. Though best known for comedies such as Austin Powers and Meet the Parents, Roach also dissected the Sarah Palin phenomenon with intelligence in the excellent Game Change.

That balance was easier to strike. The liberal director introduced smidgens of compassion for a personality the film still largely abhorred.

Bombshell, written by Charles Randolph, an Oscar winner for The Big Short, is just itching to twist the knife in the Fox newsreaders, but can’t quite allow itself the indulgence. The film covers the period when Kelly insisted that, like baby Jesus, Santa was white, but it feels obliged to bite on a hankie and tiptoe past without snorting. Roach and Randolph can get behind Kelly’s awkward questioning of candidate Trump, but fail to engage with her wider conservatism. “She’s not a feminist,” her defenders frequently reassure the suspicious. Why not? What’s going on in there?

We get more sense of an inner life with the fictionalised Kayla Pospisil. Margot Robbie (Oscar nominated for supporting actress) gives us a young religious zealot — “I don’t know secular music” — who, apparently a closeted lesbian, suffers sexual humiliation when Roger Ailes, Fox’s gargoyle in chief, interviews her for an on-air job. You feel the writers loosening up and the actor stretching out as a composite character works through the issues.

In contrast, Theron and (presumably) Kidman are constricted by the need to impersonate. Almost nobody outside the US would recognise Carlson if they met her in their porridge, but Kelly’s helmet hair and tense, sucked-in vowels have some resonance in the wider world. Rarely defeated, Theron rises to a challenge that would have been better not put her way. Let the woman act. We know she can do it.

Bombshell is entertaining throughout, but it offers little more nuance than a morning spent with Fox & Friends

Some of the clumsiness can be laughed off. A scene towards the close that sees a younger Murdoch setting up literal dominoes deserves amused forgiveness from the Metaphor Police. The queasiness in the depiction of sexual misconduct is less easy to excuse. When Ailes inspects Kayla like a potential slave owner, we are properly made aware that such abuse is as much to do with power and humiliation as with sexual desire. But the positioning of the camera as Robbie raises her skirt is more accommodating to the male gaze than the context allows. It’s hard to imagine a woman shooting in such a fashion.

Nobody could argue that quarter is given to Ailes. Stuffed up to the size of two hippopotamuses (he was a man who grabbed a “room service menu and ordered page two”) John Lithgow plays him as vulgar, rapacious and unyielding.

Yet his very monstrosity deadens some of the potential impact. Most abusers aren’t made up like Jabba the Hutt. Many conduct themselves like perfect gentlemen when in mixed company. Bombshell is entertaining throughout, but it offers little more nuance than a morning spent with Fox & Friends.

Is this our last chance to see an Irish lighthouse’s ‘beautiful loom’?
2