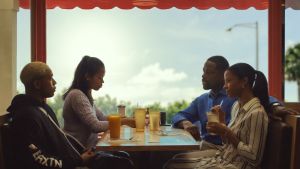 There are obvious comparisons to be made between Trey Edward Shults’s compelling third feature and the similarly giddy and sneakily powerful teen soap Euphoria. Those similarities are reinforced by the presence of Euphoria’s Alexa Demie who, in both works, emerges as a steelier presence than she first appears.

Waves, in keeping with the title, crashes on to the cinema screen, with no little sound and fury. An opening sequence, shot by DOP Drew Daniels’s spinning camera inside an SUV, sees Florida teenagers in love – Tyler (Kelvin Harrison, Jr.) and Alexis (Demie) – lounging and petting and driving to the strains of Animal Collective’s FloriDada.

It ought to feel hot and panting like puppy love, and yet somehow, it’s the most nerve-shredding car ride since the peanut allergy dash in Hereditary.

The aura of dread only increases as we come to know Tyler. An overachieving high school wrestler with a pushy dad (Sterling K. Brown) and hovering stepmother (Renée Elise Goldsberry), Tyler decides to train through the pain when, secretly, he receives a potentially career-ending injury. He turns to painkillers just as his girlfriend discovers that she is pregnant.

The heady atmospherics and soapy plot hooks coalesce into a fever dream. Waves, a dramatic diptych, powers through Tyler’s descent, only to arrive at a tragedy.

Suddenly, the film changes gear and central character. The second half concerns Tyler’s unassuming younger sister. In the aftermath of the picture’s bruising midpoint, Emily (Taylor Russell) deactivates her social accounts and withdraws to the margins of the schoolyard. One day she is approached by Luke (Lucas Hedges), a sympathetic classmate who was Tyler’s wrestling partner. They begin dating and prop each other up through respective family crises.

It’s a softer, emotional reckoning than the picture’s opening gambit might have indicated, one that is as cathartic and peaceable as the opening is euphoric and dangerous. The transition is bumpy and slightly deflating, arriving after a Tyler’s frenzied story arc. It’s a departure, too, from the darker psychology of Shults’s Krisha and It Comes at Night.

The performances, however, mind the gap: Harrison Jr is frazzled and electric; Russell is wounded and circumspect. The audacious drama is matched by musical cues from Trent Reznor and Atticus Ross’s score and a wildly impressive collection of tunes, running from A$AP to SZA.