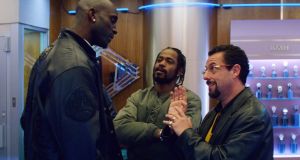 UNCUT GEMS ★★★★★
Directed by Benny Safdie, Josh Safdie. Starring Adam Sandler, Lakeith Stanfield, Julia Fox, Kevin Garnett, Idina Menzel, Eric Bogosian. 16 cert, lim release, 135 min
The Safdies follow up Good Time with a grim, blackly comic thriller concerning a cash-strapped jeweller trying to flog a rare jewel before the bookies string him up. Sandler uses his talent to irritate for good in a film that never soothes when it can grate. Darius Khondji’s camera apes the spotty fuzz of aged 16mm. And the sheer noise of the thing? All this invites such total immersion in New York’s Diamond District that the picture takes on an anthropological flavour. Astonishing. Full review DC

It’s impossible to separate El Topo (1970) from the mythology attached to the film. For five decades, Jodorowsky’s wild second feature has, among cineastes, retained a strange, magical aura. The adventures of El Topo (The Mole) – a silent cowboy who roams the desert and defeats four mystical gunslingers – are as spectacular as they are surreal. Look here, a man without arms is carrying a man with no legs on his shoulders; look there, a landscape is littered with rabbit corpses. Plenty of contemporaneously artefacts have aged badly, yet El Topo has lost none of its power to shock and seduce. Full review TB

Set in Germany during the closing days of the second World War, Waititi’s tricky comedy hangs around a deluded young man named Jojo Betzler (Davis). Like many others of his generation, Jojo has swallowed the Nazi ideology whole – so much so that he has taken Hitler as an imaginary friend. Not everything works here (mawkishness is an occasional danger) but we are never in any doubt that Waititi’s sympathies are in the right place. Johansson is strong as the boy’s mum. Full review/trailer DC

The pitch for this thoughtful French drama might make one think, not unreasonably, of such 1980s comedies as Three Men and a Little Lady, in which hapless men struggle to cope with new charges. David (Lacoste) is just such a specimen: an aimless twenty-something Parisian whose life turns upside down when he suddenly becomes the primary caregiver to his young niece (newcomer Multrier). So far, so Instant Family. But the film evolves into a fictionalised and pleasingly unsentimental variation of a traumatic 2015 news story. Full review TB