El Topo: Festooned with deformities, dwarfs and cultists, this film is not to all tastes 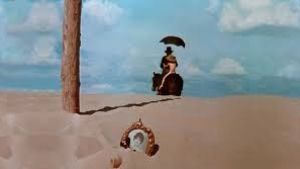 Plenty of contemporaneous artefacts have aged badly, yet El Topo has lost none of its power to shock and seduce

It’s almost impossible to separate El Topo from the mythology attached to the film. For five decades, Alejandro Jodorowsky’s wild second feature has, among cineastes, retained a strange, magical aura.

Aged 22, as folklore has it, Quentin Tarantino started to work at Video Archives, a movie store in Manhattan Beach, California, where he was impressed to discover a bootleg copy of El Topo, an item that demanded a $100 deposit from the would-be renter.

Festooned with deformities, dwarves and cultists. Jodorwosky’s psychedelic odyssey was not to all tastes. “Is El Topo a Con?” asked the New York Times in 1971. Young patrons were keener. The film’s late night popularity with aesthetically adventurous weed-smokers codified the idea of the Midnight Movie.

El Topo’s tempestuous marriage of spaghetti western iconography and eastern philosophy won over such celebrity champions as John and Yoko. It was Lennon who persuaded Allen Klein, then the manager of Apple, to buy the rights to it, and he put up $1 million for Jodorowsky’s next movie, The Holy Mountain.

The association was not a happy one. Jodorowsky, who was then immersing himself in 1970s feminist literature, refused Klein’s demand that he adapt Pauline Réage’s masochistic standard Story of O. Klein, in turn, made El Topo and The Holy Mountain unavailable to the public for more than 30 years. (It emerged on DVD as late as 2007).

The counter-cultural acid western was still causing ructions as recently as last year when an interview from the time of the New York premiere, in which Jodorowsky claimed that a rape scene was unsimulated, resurfaced, prompting the El Museo del Barrio in New York to cancel a major retrospective. Apparently the museum had missed the decades-worth of interviews in which the writer-director dismissed the claim as a publicity stunt; he even gave the offending interview dressed as the titular character.

Speaking to this newspaper in 2016, Jodorowsky, who wrote, designed, scored and starred in the film, noted that: “Avatar makes hundreds of millions of dollars and after three months no one can remember it. People can remember things from my pictures 40 years after they’ve seen them.” He’s not wrong.   The adventures of El Topo (the Mole) – a silent cowboy who roams the desert, and defeats four mystical gunslingers – are as spectacular as they are surreal.

Look, here’s a man without arms carrying a man with no legs on his shoulders; look, there’s a landscape littered with rabbit corpses.    Plenty of contemporaneous artefacts have aged badly, yet El Topo, which was always too confrontational to qualify as groovy, has lost none of its power to shock and seduce. This new edition is the first in a welcome season of Jodorowsky reissues. And no hefty deposit required.

Terry Jones, Monty Python star, dies at the age of 77
4