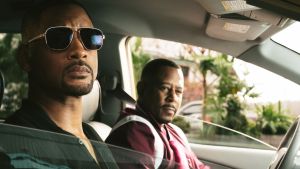 Bad Boys for Life: The performances are mere delivery systems for the violence

Is there a name for those films in which some superannuated star – say Will Smith or Martin Lawrence – repeatedly grinds to a halt at a chain-link fence and wheezes: “I’m getting too old for this!” Clint Eastwood has been making them for around 40 years.

Ang Lee’s recent Gemini Man was such a film. Bad Boys for Life (not “4 Life” as it’s only the third in the series) should be another, but frustratingly the film turns out to be livelier than any sane person could have hoped. The funny bits are funny. The serious bits are even funnier. How did the Will Smith film made by Michael Bay’s Belgian stand-in end up less bad than the Will Smith film made by the actual Ang Lee?

A cynic might argue that the cleverest thing Bay has done in years is pass this project on to Adil El Arbi and Bilall Fallah. Clearly of less frenzied disposition than their mentor, the young filmmakers sometimes allow a shot to last as long as seven or eight seconds. Not every snatch of dialogue is delivered while advancing from a rampaging fireball. Indeed, Bad Boys for Life seems like the work of Andrei Tarkovsky when set beside the preceding films in what (for all the current project’s decency) we long to call a trilogy.

The plot is hardly worth spoiling. Marcus (Lawrence, looking his age) and Mike (Smith, criminally unaltered), Miami’s most destructive police officers, have evolved into different sorts of grumpy bastard. Marcus is a family man. Mike is still looking for the right woman. Various conflagrations cause them to go up against a Mexican crime cartel that seems – more delightfully than I can convey – to be led by a sexy witch with a stirring line in sinister cackles.

“All our lives we’ve been bad boys. Now it’s time to be good men,” Marcus, who’s made a pact with God, tells his partner. Mike’s disdainful snort will be echoed by audiences everywhere as they proceed to make colanders and cheese graters of every chap in their path (that’s to say, full of holes).

It is impossible to watch the picture without meditating on the way video games have changed action cinema. Similar thoughts kicked up during the very different 1917, but the loop is more dizzying here. Grand Theft Auto: Vice City was essentially a Bad Boys video game and now the franchise has gleefully repaid the debt. Moral choices are inconsequential. Noise is more important in action sequences than structure. The performances are mere delivery systems for the violence.

I’m not yet too old for this. You may not be either.