August Diehl: ‘Acting with Malick you are part of a band making music’ 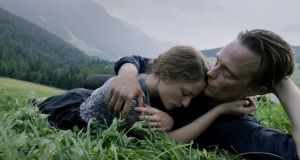 Valerie Pachner and August Diehl in the film A Hidden Life

I talk to August Diehl during a break from rehearsals for the Berlin production of Yasmina Reza’s God of Carnage. You have to hand it to the guy. I wasn’t sure you got this sort of stuff outside the West End — or maybe the Trocadero restaurant in Dublin — but he’s an Actor with a capital A (surrounded by naked bulbs).

“I am doing theatre now and in one play I learn more than in three movies. We belong there,” he says. “The stage is something we bring to the movies when we are invited. Actors who have never been on stage are often great actors — much better than me. But even those are essentially stage actors even if they’ve never been on stage.”

Yeah, all right. Being in plays is great.

To be fair, he does also appreciate the elements that make cinema so special.

“Architecture, light, acting, sound, editing, so many things,” he continues. “That is so beautiful. But is not really depending on us. There are brilliant films with average actors — like 2001: A Space Odyssey for example. There are outstanding movies with no actors. But there is not one theatre evening that is good with bad actors.”

It sounds as if he’s been to a school nativity play.

Anyway, August, a lean, handsome fellow with an angular head has probably been having this conversation since he first stood upright. Born in Berlin, he is the son of an actor and a costume designer. Now 44, he has been working steadily — in both film and his beloved theatre — for the past 20 years. He was great in the 2002 chiller Tattoo. He was upfront in the Oscar-winning The Counterfeiters. You saw him as Major Hellstrom in Inglourious Basterds and as the eponymous legend in The Young Karl Marx.

This year, he appears to great advantage in Terrence Malick’s moving epic, A Hidden Life. Punters understandably tired of Malick’s “spinning women” films — the bad To the Wonder, the worse Knight of Cups — will be relieved to hear that the director is back on form for a study of the Austrian martyr Franz Jägerstätter.

The short version is that Jägerstätter was a conscientious objector executed by the Nazis for refusing to serve. Malick’s baggy film confirms that the issues were a little more nuanced. The script suggests that, like conscientious objectors in many countries, he was promised non-combatant work, but refused to sign the oath of allegiance. In the film, even sympathetic associates suggest that he may be dying for a technicality. I wonder if Diehl has figured Jägerstätter out.

“Although it is a simple story. It is a very complex issue,” he says. “I would like to say in capital letters that everything I am going to say about Franz Jägerstätter is not about the real person. I don’t have the right to say that. I don’t know him. I am talking about the character I play in the movie.”

So, what about the fellow in the film? Do we understand him?

“Franz Jägerstätter is a farmer,” he says. “He lives in a quiet place. It is a hidden life. He loves his wife and his children. The rains fall down and waters his crops. They become flour. Then you make bread that feeds your children. That makes a man a believer in a very simple and natural way. It’s like the simplicity of living from the ground. We have lost this as we become more urban people.”

August has a lot more to say about Jägerstätter’s sudden, jarring encounters with the forces of fascism. He talks about the uncomplicated morality of children and the way that gets corrupted in adulthood. He compares that to the attitudes a simple man isolated from the cruelties of modern life. He eventually comes around to Malick’s advice to his actors.

“There was only one note: ‘I don’t want to have a pious farmer who is a Catholic guy. I want someone who is struggling until his last breath — not knowing if this is the right decision.’ When I look at the movie that’s the big strength of the movie. There is a struggle throughout.”

Jägerstätter’s faith is a recurring theme in A Hidden Life. In later stages, the character’s crises of conscience recall those in Martin Scorsese’s Silence. It took a while, but as the decades passed, the real Jägerstätter gained recognition within the wider church. In 1964, Gordon Zahn, an admired American peace activist, happened upon his story and used it as the basis for his book, In Solitary Witness. Thomas Merton, the distinguished Trappist monk and mystic, wrote about him in Faith and Violence. By 1971, his story was sufficiently well-known to generate a TV film by Axel Corti. In 2007, under the orders of Pope Benedict, he was formally beatified by the Catholic Church.

Does this make him a celebrated figure in Austria and Germany?

“He is almost not known in Germany at all,” Diehl explains. “He is known a little in Austria. There was a feature movie way before. It’s a good movie. That was one thing. But the whole story is so weird. In the place where he lived he was known as a stubborn, stupid person. When he was beatified by the Pope and that made people angry. They were saying: ‘How can this possible?’”

It seemed that there were those who still remembered Jägerstätter’s early years as a tearaway. So many religious lives begin in that fashion.

“He had a wife before this wife,” he says. “Earlier, he was this guy on a motorbike who was fighting with the police because he was so drunk. He was swimming through the river searching for this. There is a person behind this who is a fighter and a rebel.”

Speaking of religious figures, Diehl has, in working with Terrence Malick, come close to one of cinema’s quasi-deities. There are no careers like it. A Kierkegaard scholar who studied at Harvard and Oxford, the director first attracted attention with the bewitching, disturbing Badlands in 1973. The equally extraordinary Days of Heaven followed in 1978. Malick then went silent for 20 years. He maintained a Pynchon-like isolation from the public following the release of 1998’s The Thin Red Line — refusing, in 2011, to turn up at Cannes to accept his Palme d’Or for The Tree of Life. As a result, any actor lucky enough to work with Malick will be mined for clues as to his character.

“He is about cinema first,” Diehl says. “If you want to work with him you have to accept that. I wouldn’t say he is a huge director of actors. That is not necessary for him. You are part of a band. You are making music and you are looking for a silence in the music. I never had that before. If I never again work with Terry — which doesn’t happen with him — then I will never have that again. But I am very grateful for the friendship that is still going on. This is a gift.”

Does Diehl get any sense of why Malick makes so few public appearances? Is he actively courting mystique?

“I was thinking about this,” he says. “I feel that I am very much like him. He appeared in a time when it was possible to disappear. That happened early and nobody questioned it. What is more important is that, even in our world, we should let people be like that. Look at Terrence Malick. The movies that we see from him would not be possible if he was a person who goes out and talks about that work. His work is built in silence.”

Which makes a sort of sense. Diehl makes an interesting point about the director rarely returning to actors. Martin Sheen and Sissy Spacek, stars of Badlands, never appeared in another Malick film. Sean Penn got a go in both The Thin Red Line and The Tree of Life, but that was a rare reoccurrence. Mind you, the director does manage to produce similar performances from each actor: deadened, distanced, dreamy.

What could prepare you for that?

“I grew up in an artistic world,” Diehl says. “My father is an actor. Acting is something I had been seeing since I was a child. I grew up in this whole thing. But I am discovering more and more about it and it doesn’t bore me. That’s quite crazy. I am doing this for 20 years and the best thing is watching other good actors rehearse a scene.”

In films. But it is plays that really matter. Right?

“When I am making a movie I am not kowtowing,” he says cryptically. “but I am behaving like a guest.”

A Hidden Life is released on January 17th