Uncut Gems review: Adam Sandler ends up naked in the boot of a car 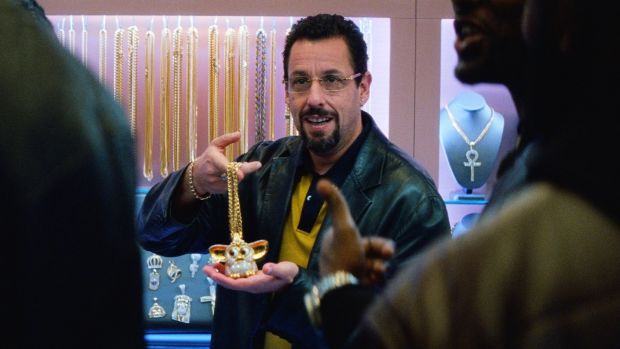 It takes great discipline to deliver indiscipline on this scale. Josh and Benny Safdie dipped toes in New York’s pinballing underground with the compulsive Good Time, but Uncut Gems marks a notable escalation of hostilities. It is to the earlier film as Ulysses was to A Portrait of the Artist as a Young Man.

At times, the portrait of midtown Manhattan suggests a flick-book of Polaroids viewed amid an inner-city riot. It is all grain and noise and desperation. One dreads to think what they might have accomplished with the addition of Odorama. Yet there is a shape here. These angular film-makers wouldn’t allow anything so sentimental as character development, but their encouragement to sympathise with an urban weasel of Dickensian proportions ultimately proves hard to resist. The devil has the most cacophonous tunes.

That useless, energetic hustler – a jeweller in the Diamond District – takes the Marmite form of Adam Sandler. Having run up gambling debts of some $100,000, Howard Ratner (that surname’s resonances are entirely fortuitous) has pitched hopes of salvation on a rare black opal smuggled in from Ethiopia. Things go wrong. Things always go wrong for Adam Sandler characters.

The best of the star’s straight roles – think Paul Thomas Anderson’s Punch-Drunk Love – have been those in which he plays a terrifying version of his stock comic weirdo. Ratner is smarter than the fools in Big Daddy and Happy Gilmore, but, like them, he is essentially a child in man’s trousers.

Distracted and flattered by the attentions of a professional basketball player, he loans the rock out for a few days. Misunderstandings with his bookie (an ageless, sinister Eric Bogosian) soon highlight the foolishness of that decision. Eventually, as you might expect from a Sandler joint, he ends up naked in the boot of a car.

Sandler uses his talent to irritate for good in a film that never soothes when it can grate. Daniel Lopatin amplifies ambient drones into effective simulacra for tinnitus. Darius Khondji’s camera apes the spotty fuzz of aged 16mm. All this invites such total immersion in one corner of New York that the picture takes on an anthropological flavour. To ape Joyce again, future societies could rebuild the Diamond District from a few viewings of Uncut Gems: creased brows, expensive suits, stuffed glass cabinets everywhere.

There is humanity in here as well. Julia Fox offers a touching breakthrough performance as Howard’s girlfriend. Idina Menzel owns the screen (and the whole cinema and the entire block on which it sits) as the misused, defiant mother of his children. The audience, eager to give such characters their due, has to crane its collective neck as the momentum drags it to a relentless conclusion. But it’s worth the muscular strain. There’s more to Uncut Gems than dizzying momentum. I am not, however, altogether sure I could handle their Finnegans Wake.