TV View: Megan Campbell could teach the Glazers a thing or two 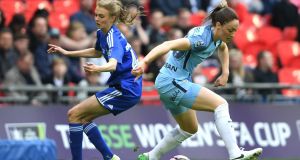 It was an easy enough decision to remove both the Eurovision Song Contest and the European Champions Cup rugby final from the weekend’s viewing list after the semi-finals saw all Irish interest eliminated. Some might suggest this was being a bit parochial. Nonsense. So the weekend’s focus was instead on Wembley, where Drogheda’s very own Megan Campbell was playing in the FA Cup final.

Campbell, incidentally, was born in 1993, the year Niamh Kavanagh won the Eurovision during a period in our history when we were showered with so many douze points that we couldn’t stop winning the thing. The Manchester City defender’s generation, on the other hand, have experienced solely Eurovision heartbreak. If only she knew someone who could bring back the glory days.

Jonathan Pearce: “I’m told her granda’ is the lead guitarist with The Dubliners. Remember them?”

That was the end of that exchange, then, Sue more interested in Campbell’s throw-ins than her musical genes, the length of those Rory Delap-style missiles being a long-time source of wonderment.

“How. Does. She. Do. It?” Jonathan asked us, but we had no answer. Her coach at Florida State University figured she had elastic in her arms. Campbell herself said that her City manager Nick Cushing assumed she “lived on a farm, picking potatoes”. She didn’t, as it happens, but, as she demonstrated again at Wembley, this particular weapon of hers is truly a golden wonder.

It was with her feet, though, that she set up two of City’s goals in a 4-1 win over Birmingham City, played in front of a crowd of 35,271 – bigger than the attendances at three of the day’s five Premier League games. Granted, Bournemouth, Middlesbrough and Stoke were the hosts, but, still, it’s only four years since fewer than 5,000 turned up to watch Arsenal beat Bristol Academy in the FA Cup final, so the game would appear to be a-growing.

And as the England manager Mark Sampson said back in the studio, City’s investment in the women’s side of the club’s operation is paying off rather handsomely, the treble now secured. Their red-clad neighbours, meanwhile, have no senior women’s team at all, because the Glazers concluded a decade and a bit ago that it was “not part of the club’s core business”. If the soccer-loving girls of this planet start buying Manchester City merchandise – preferably jerseys with Campbell’s name on the back – they might have a rethink.

A mere 25,000, meanwhile, squeezed into Selhurst Park to watch Crystal Palace and Hull City battle it out to avert a slide into the Championship. “This afternoon will be nothing short of excruciating,” Sky’s Bill Leslie warned us, and it was that – for Hull. He’d already told us they’d left home at 5am that day in their coaches, and all they got for their efforts was a 4-0 mullering and relegation.

The sight of sobbing supporters would break the stoniest of hearts, so time to head over to the Spanish Grand Prix for some light relief.

And there was a little boy in the stands dressed from top to toe in Ferrari gear, sobbing uncontrollably because Kimi Raikkonen’s race lasted not long after he put the key in the ignition, so to speak.

It was turning into a tear-drenched day.

There was a happy ending, though. “I’m in tears meself,” our commentator David Croft said when we were shown the now-beaming boy hanging out with Kimi in the Ferrari paddock, having been plucked from the crowd and invited down, thereby leaving us viewers concluding that Formula 1 is warm and fluffy.

The mood of Paddy Lowe, Williams’s chief technical officer, was a bit darker, though, after Stoffel Vandoorne put the kibosh on Felipe Massa’s hopes by bumper-car-ing him.

“That couldn’t have gone much worse for you,” David said to him.

“It was actually a great start,” said Paddy, “until it went wrong.”

Kind of sums up our Eurovision history, too.

1 Shock at golf clubs as sport faces shutdown in Level 5
2 Dan Martin toasting another stage win at the Vuelta
3 Andy Farrell reshuffles his hand for rescheduled Italy game
4 GAA scrambling to deal with GPA demand for ‘baseline testing’ of all county panels
5 Ireland 5 Germany 2: When Nazi salutes took over Dalymount Park
Real news has value SUBSCRIBE
Here is your handy guide to sport on television this week