Leona Archibold is player of the match, while Tipp are crowned Division 3 champions 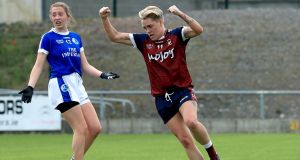 The Lake County were Division 4 winners in 2011, claimed Division 3 honours a year later and are now preparing for Division 1 fare next year.

In a surprisingly one-sided rematch at St Brendan’s Park in Birr, Westmeath scored all but one point of their big tally from play.

They also lost Karen McDermott to the sin-bin shortly before half-time but coped admirably in her absence as Cavan struggled to reproduce the kind of football that saw them go close to victory in the drawn match at Parnell Park.

Aisling Doonan did well, notching six points, but Westmeath had the better spread of scorers.

Despite losing three players to second half sin-binnings, and finishing the game with 13 players, Tipp held out in an enthralling replay against Wexford at St Brendan’s Park, Birr.

Beaten finalists after a replay with Waterford last year, Tipp got over the line this time to secure promotion to Division 2.

And they had to do it the hard way, coming from six points down in the first half to hold on with two to spare.

Jota forgets penalty miss to steer Liverpool past West Ham 20:08
Dean George bags a hat-trick as Athlone stun Shels 19:27
England lay down marker for Ireland after bonus point win in Rome 19:09
Dublin return from the dead to give Kilkenny a scare in Croke Park thriller 18:57
James McClean nets for Stoke as they beat Rotherham 18:35
Crossword Get access to over 6,000 interactive crosswords