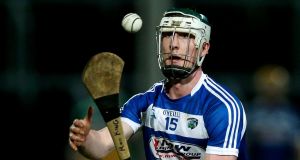 Ross King was key for Laois as they beat Kerry to advance in the Leinster SHC. Photo: Inpho

Laois secured their third straight win in this Leinster SHC round robin qualifier and they’ll advance with confidence to face the face Wexford but they were greatly assisted by a Kerry side who gave away some very silly frees in an enthralling battle at the Austin Stack Park.

Laois sharpshooter Ross King had a field day converting 11 of 12 frees attempted while Kerry missed six scorable frees and, in a game of tight margins, this proved crucial.

The two teams traded scores right throughout the opening half with King deadly accurate from frees, scoring four. More points from the impressive Paddy Purcell and Aaron Dunphy were complimented by a Neil Foyle goal after three minutes.

But Kerry with Mikey Boyle, Brendan O’Leary and hard-working John Buckley, had Laois on the back foot in a contest played with ferocious intensity. Mikey Boyle and Jordan Conway from play and Shane Nolan with 0-5 from placed balls had Kerry in touch approaching half time.

But then the home side hit back with a 60 second two goal salvo from Nolan in first half injury time, giving them the momentum as they retired 2-8 to 1-7 in front.

Kerry took an age to reappear for the second period and Laois made them pay with three rapid points , two by King after Kerry gave away needless frees, before the game turned dramatically in favour of Laois.

Firstly Paddy Purcell netted for Laois before Kerry lost Sean Weir to a second yellow and, down three points and a man, it was always going to be a mammoth task to get the win.

To their credit Kerry gave it everything with Mikey Boyle drilling a free to the net but King kept punishing and they came up short by three points.

But they secured their status by finishing third for 2018, while Laois face the might of Davy Fitzgerald’s Wexford in two weeks.