Visitors passive with Stockholm on the horizon as Tottenham dominate proceedings 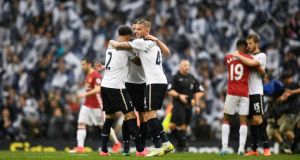 As farewells go, it was precisely the kind of send-off that Tottenham Hotspur must have craved bar that one small, annoying detail about Chelsea’s position squatting defiantly at the top of the Premier League. The title is gone now and the same will soon apply to White Hart Lane, 1899 to 2017, but it was some way to go and one final happy memory from the stadium that gave us The Game Is About Glory.

Unfortunately for Spurs, it did not turn out to be the glory they wanted during those thrilling weeks when Mauricio Pochettino’s team were threatening to catch and overhaul Chelsea. This is, however, their first second-place finish – and the only time they have gone an entire season without losing at home – since Bill Nicholson was manager in the 1960s. A small thing, perhaps, but the people who cherish this old stadium should embrace the fact it has reached its endgame with the best statistics of any ground in the country.

That, of course, told only part of the story on a day when the acoustics inside White Hart Lane have rarely sounded so good. The volume was turned high as the Spurs fans fluttered their flags and serenaded their former heroes and it would all have felt terribly out of place if the current side had not risen to the occasion. Pochettino’s team ensured there was no sense anti-climax. Yes, it was a melancholic day for the supporters who have headed down Seven Sisters Road all those years but, hell, those people made some noise turning it into a celebration. Spurs are on their way to Wembley, as the old song goes, and when Chas and Dave made a guest appearance at half-time they did make the point that the new stadium will actually be slightly closer to White Hart Lane when it opens for business in August 2018.

More than anything, it was a victory that felt fitting for this kind of occasion. Spurs inflicted the damage with early goals in each half, courtesy of Victor Wanyama and Harry Kane, and came through an awkward period after Wayne Rooney’s goal had given Manchester United 20 minutes to save themselves. In a different era, the team from Old Trafford once came back from 3-0 down here to win 5-3 and create their own piece of White Hart Lane history. Sixteen years on, the modern-day team does not have the same kind of precious magic. This scoreline flattered Jose Mourinho’s side and the ramifications come in the form of what it means for the league table.

This will be the first time United have finished outside the top three in four consecutive seasons for 30 years. They have gone even longer, back to the early-1970s, since they have trailed Manchester City four years running. Mourinho’s talk of going for the title feels a faint memory when they are 22 points off the top and it almost came as a shock when Rooney turned in Anthony Martial’s pass to change the complexion of the second half. United have failed to score in all their other away games against the teams above them in the top six. It was the same when they played at Chelsea in the FA Cup but they did at least make it a nervous finale for Spurs.

By that stage Mourinho had decided to abandon the tactic of using Axel Tuanzebe, a centre-half by trade, in a man-marking role on Christian Eriksen. Tuanzebe chased his man all over the pitch but the problem for the 20-year-old, starting only his second top-division fixture, was he could not mark Eriksen at corners and free-kicks – and United’s centre-halves, Chris Smalling and Phil Jones, both looked vulnerable.

After five minutes, Eriksen had the chance to swing over a corner from the left. He played it short, rolling the ball back to Ben Davies and United’s marking was generous, to say the least, when Tottenham’s left-back clipped his cross into the middle. Wanyama was unchallenged in the space between Rooney and Phil Jones and directed his header beyond David de Gea.

Eriksen was also involved when Spurs doubled their lead three minutes into the second half, this time whipping a free-kick into the six-yard area at just the height and speed that goalkeepers dread. Eric Dier could not reach the cross but Kane jutted out his leg. Smalling was slow to react and De Gea was beaten for a second time.

By that stage Spurs would have been in a far more comfortable position but for De Gea’s brilliant goalkeeping and a succession of first-half saves. Kane struck the crossbar with a close-range header and for long spells there was the clear suspicion that United were simply going through the motions, with the Europa League final uppermost in Mourinho’s thoughts.

That impression did change slightly once Anthony Martial had turned past Kieran Trippier to set up Rooney’s goal – a poor moment for the Spurs right-back on a day when he kept Kyle Walker out of the team – and the substitute Marcus Rashford might have changed the mood in stoppage time. It would have been unwarranted, however, and game number 2533 at White Hart Lane had its happy ending.