Westmeath hold out to advance and relegate Meath 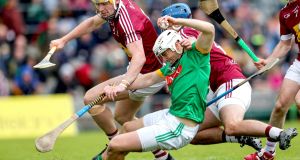 A well taken goal in the 51st minute from the impressive Killian Doyle proved to be the decisive score as Westmeath ground out a crucial win against neighbours Meath in the third and final round robin series of the Leinster senior hurling championship on Sunday.

Westmeath had the aid of a slight wind in the opening half but it was Meath who raced into an early lead with points from play by Steven Clynch and Adam Gannon. Approaching the end of the first quarter, the home team went ahead for the first time (0-4 to 0-3) with Allan Devine’s third successful free and they looked the better team for the remainder of the half. Michael Ryan’s charges were in control and leading by 0-9 to 0-4 when Derek McNicholas picked up a straight red card on the advice of a lineman in the 34th minute. A brace of fine points from substitute James Kelly had the deficit down to three points (0-9 to 0-6) at the interval.

Despite being a man down for much of the game after Derek McNicholas was sent off in the first half, Westmeath were four points to the good by the 45th minute. However, three unanswered points brought the margin down to the bare minimum for Martin Ennis’s men before Doyle took a clever pass from inspirational team captain Aonghus Clarke and drilled a low shot past Shane McGann. Points followed from the outstanding Robbie Greville, Doyle and Allan Devine to put the Lake County well in control.

Meath threw everything into attack in the closing quarter of an hour but could never get closer than two points, with full back Tommy Doyle and centre half back Paul Greville in imperious form for Westmeath.

They now play Offaly in the quarter-final while Meath return to the Christy Ring Cup after just one season in the Leinster championship.