TV View: Mistime your kettle runs and you could miss all of the action 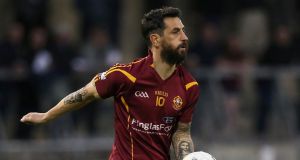 Paul Galvin: he told Ray D’Arcy he joined Oliver Plunkett’s as he was “too young to be sitting on the couch”. Photograph: Luke Duffy/Inpho

After a while, with all the oscillating between TG4 and Sky Sports, Tipperary, Clermont and Leinster merged into a blurry sea of yellowy blue, that disorientation coming after an early afternoon of fluctuating between the hoops of Celtic and the stripes of Kilkenny.

Another one of those Sundays, then, following hard on the heels of a Saturday that was no less taxing.

When he was chatting to Ray D’Arcy that night Paul Galvin explained that he resumed his club career by joining Oliver Plunkett’s in Dublin because he was “too young to be sitting on the couch”, the thoughts of whiling away his free time by looking at a telly simply torturous to him.

He underestimates the discipline and dedication involved, though, as anyone who sat through Celtic v Rangers v Cork v Kilkenny v Tipperary v Galway v Clermont v Leinster v Arsenal v Manchester City v Neil Robertson v Marco Fu v Real Madrid v Barcelona on Sunday would know. And, of course, there’s no little skill involved either. Get the timing of your runs to the kettle wrong and you could miss three goals, a sending-off, a try and the mother of all safety shots.

Or, if your anticipation adeptness is lacking, you could pass three minutes by flicking to BT Sport just in time to see Sergio Agüero celebrate a goal he scored while you were still watching Sky, on to TG4 to see Jason Flynn whoop it up – having, by all accounts, burst the back of Tipp’s net – and on to Sky to see Dan Leavy look gutted after scoring a try that you missed that was subsequently ruled out by the TMO in a moment of apparent high drama that you also missed.

As Rassie Erasmus told Sarra Elgan of BT Sport on Saturday, “If you want a biscuit you have to risk it”

But, as Rassie Erasmus told Sarra Elgan of BT Sport on Saturday, “If you want a biscuit you have to risk it.” He hadn’t quite channel-hopping in mind, but the theory held.

Although the weekend featured many a dazzling performance – if not as dazzling as the white shoes Donncha O’Callaghan sported on BT and will never be allowed to forget by all those who know him – nothing quite reached genius levels, an accolade that Galvin afforded his former team-mate the Gooch when he doffed his cap to him.

“He was a complete one-off, a genius thinker, a genius player,” he said before recalling the days when he roomed with him. Before the 2007 All-Ireland final, for example, Kerry’s prematch meal was scheduled for noon, and they had until 1pm, at which point they would leave for Croke Park, to organise themselves: gather their gear, see to their strappings and suchlike.

Galvin returned to his bedroom at 12.50pm and “saw this little tuft of red hair under the duvet”. The Gooch was still snoozing. “You have a game in about two and a half hours, if you wouldn’t mind getting up and joining us for it,” Galvin said to him. At which point the Gooch rolled over for another little nap, before finally rising.

“I thought he was sick or something,” Galvin said. “Then he went out and scored 1-5 and got man of the match”

“I thought he was sick or something,” Galvin said. “Then he went out and scored 1-5 and got man of the match.”

So, that criticism of the Gooch from a certain bespectacled northern gentleman?

“Showbiz stuff,” he said, guffawing. “When you’re a genius you don’t need a warrior mentality – and he’s a genius.”

The Gooch, that is, not the bespectacled northern gentleman.

Garry Ringrose, meanwhile, warriored his way to a genius of a try for Leinster, resisting the temptation to lift his shirt to reveal a T-shirt inscribed with “How d’ya like that, Warren Gatland?” But it wasn’t to be, Leinster’s hopes of making it to Edinburgh for the final shindig going the same way as Munster’s: up in smoke. A gutting outcome for Irish rugby, although at least anyone hoping to fly to the Scottish capital that weekend for nonrugby business won’t have to remortgage their homes to pay for their flights.

Unless they’ve already been bought out by overconfident Leinster and Munster fans who chanted “If you want a biscuit you have to risk it” as they clicked “Pay”.