Despite a four-putt double bogey six at the 15th, the Douglas man held on for victory 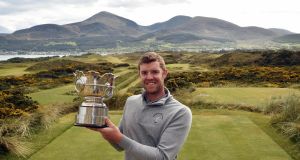 It took five years of sweat and tears on tour, a two-year transition period back to the amateur ranks and thousands of practice balls with Noel Fox but, if the stars align, Douglas’ Peter O’Keeffe might just win his first Irish cap this year.

The 35-year old former Challenge Tour player could proudly boast that, bar a four-putt double bogey six at the 15th, he put on a ball-striking clinic as he closed with a 73 to win the Flogas Irish Amateur Open by three shots on two-over 286 at a blustery Royal County Down.

Wth his long game now as rock steady as his 6’5” frame proved to be in Sunday’s 20mph gusts, the gentle giant knows that a solid summer will give the Irish selectors serious food for thought when the time comes to pick the team for the Home Internationals at Moortown in August.

“There was a time in my life where everything revolved around trying to make the Home Internationals team and it didn’t happen in a previous life so to speak,” said O’Keeffe, who extended his one shot overnight leader to four when he birdied the first and bogeyed the fourth to turn in level par, then extended his advantage to five with a birdie at the 11th.

“I’d absolutely love it obviously. They should have their eyes on younger players. But I’m more than good enough to play at that level and I’d be delighted if it came my way.

“They need to pick the best team and I believe I am more than good enough to play on that team. It would be a great honour for me and if I can put my name out there enough, we will see.”

Ireland cannot afford to ignore a man of O’Keeffe’s experience and the mental strength he showed when draining a clutch eight footer for par at the 13th, before recovering from an unsettling four-putt double bogey six from some 60 feet at the 15th, was hugely impressive.

“I had a feeling I was going to win something big this year,” O’Keeffe said after pars at the 16th and 17th gave him a four-shot lead going to the18th, where he could afford a closing bogey six and still win comfortably from Scotland’s Christopher MacLean (75) and England’s Tom Sloman (72), his nearest rival for most of the day, with a two-over par 73.

It was in the first of six appearances at the European Tour Qualifying School that O’Keeffe saw what he wanted to be but is only now becoming.

“I remember playing with Simon Thornton in my very first Tour School, and we were playing in horrendous conditions,” O’Keeffe said. “I got through, but he just cruised through, and that was the unflappable attitude that I wanted to get.”

Pointing to his par save from eight feet at the 13th as “key”, he added: “I don’t get flustered on a golf course any more. When I was on tour, there were times when I’d be ripping gloves off my hand on the golf course. Crazy stuff.

“I have done a complete full circle on that. But it took a lot of work, a long time and a lot of bad experiences to realise that was the way forward.”