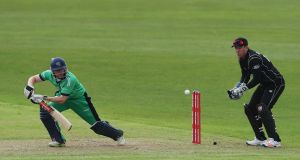 A brilliant first One-Day International century from Niall O’Brien wasn’t enough for Ireland as they went down to a 51-run defeat to New Zealand in the second game of the Walton Tri-Nations Series at Malahide on Sunday.

The 35-year-old left-hander had given Ireland hope of a first ODI victory over a Test-playing nation on home soil right until he was dismissed, stumped by Luke Ronchi off the bowling of left-arm spinner Mitchell Santner, who went on to complete his first five-wicket ODI haul.

It was Santner’s third spell with the ball and a change of ends that made the difference as he took four wickets for seven runs in four overs to end Ireland’s brave chase of 290 on 238 in the 46th over.

Santner had earlier taken a fine catch off his own bowling to dismiss Andrew Balbirnie for 36 and end a productive third-wicket partnership with O’Brien after they had made 86 runs. Santner had also suffered during his second spell, conceding 33 runs in four overs as O’Brien and Gary Wilson again brought Ireland back into the game.

The pair put on 75 in 66 balls before Wilson’s knock ended tamely, holing out to Ross Taylor in the covers to give Scott Kuggeleijn a third wicket on his international debut. A son of former Pembroke player, Chris, Kuggeleijn had also removed Ireland’s openers William Porterfield and Paul Stirling with back-to-back deliveries.

O’Brien, promoted to number three due to Ed Joyce’s injury, was his busy self from the off, hitting nine fours and five sixes in his knock as he went on to beat his previous ODI best of 80 not out before being stumped for 109 as he danced down the pitch to attempt another big hit.

Earlier a strong middle-order batting performance helped the Black Caps make 289 for seven after being put in to bat on a breezy morning in north county Dublin.

Ross Taylor showed a bit of his class with 52 from 60 balls, while George Worker’s more workman-like 50 off 89 saw him hang around until the 39th over. It was Neil Broom that did the real damage, his 79 off 63 balls pushing the score on towards 300.

It proved enough in the end but for a long part of the afternoon, Ireland sensed that they were right in the game.

“Yeah, it is a bit of a missed opportunity there, obviously we should have got a little bit closer, we just lost a few wickets at crucial stages,” said skipper Porterfield.

For O’Brien, whose knock of 72 helped Ireland beat Pakistan at the 2007 World Cup, it was a bittersweet innings.

“It’s probably my best, it’s my first ever hundred at the 85th time of asking so it’s been due. But disappointing we didn’t get over the line, so it’s a missed opportunity.”