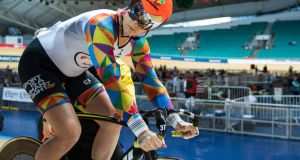 It used to be so much more uncomplicated. Two men wearing boaters would string a tape across the finish line, the winner surging through in plimsolls, hands in the air.

If it was a dead heat the blazers would puff their pipes in a solemn huddle and the local lad declared the winner. The gentlemen runners would shake hands, agree the best man won and move on to collect their Olympic medals.

Much simpler times and a clarity of rule-making that drew on certainties and paradigms of the day. It’s a historical milieu into which the transgender LGBTQ dispute and growing male/female definitions do not comfortably fit.

In those days it was always men steering that ship. Men because people like the modern founder of the Olympic Games, Baron de Coubertin, emerged from the muscular Christian right. His great strength was unwavering certitude on issues such as what defined men and women. Now more hilarious than ever.

But those serious-looking officials in their flat hats and leather shoes, what would they think now as their certainties become so uncertain, as their notions of male and female become a 21st century battleground, as their ideas of gender are no longer dogmatic and the once commonly held belief that sex is binary hotly disputed.

In sport there has always been disagreement, and each generation has had their own way of working it out. Recently World Rugby became the first international sports body to ban trans women from the women’s game following an eight-month review.

They ruled that they could no longer play elite women’s rugby after the latest science concluded that the risk of “significant injury” was “too great”. This week the RFU broke ranks saying “further scientific evidence is required”.

Fair Play for Women, a campaigning group working to protect the rights of women, were one of the first out of the blocks attacking the RFU.

“Everyone knows that in a rough sport like rugby it is dangerous for males to play against females,” said the campaigning group’s Nicola Williams. “And if it’s not safe, it can never be fair either. The science is clear. Growing up male will give transgender athletes a lifelong edge that simply cannot be fully reversed.”

Williams added the category for the female sex was invented so women and girls could be included in sport, and World Rugby has put the safety of its professional female players first. She asked why the RFU doesn’t do the same, why women players don’t deserve the same protections. Thing is, other people disagree.

Trans athletes are those with a condition called gender dysphoria, which compels individuals of one gender to assume the identity of the opposite sex. That often results in gender reassignment surgery and hormone treatment. An athlete nominally born “male” may end up playing in a “female” rugby match.

Since 2004, Olympic rules have permitted trans women to compete in athletics if they are two years removed from gender-reassignment surgery. The decision followed a Dutch study in the European Journal of Endocrinology.

The question is whether their prior lives as a male, their male muscle growth and male muscle memory can be undone, unmemorised after two years, or does the surge of testosterone at puberty give an enduring advantage.

New International Olympic Committee (IOC) guidelines came out in 2016. Female-to-male athletes can now compete without any restrictions. Male-to-female athletes no longer need to have reassignment surgery, but do need to demonstrate lowered testosterone levels of 10 nanomoles per litre (nmol/L), which is around the bottom of the range considered normal for adult males. It is also more than three times higher than the upper limit of the normal range for adult females.

So the IOC, from originally having athletes parade naked in front of female doctors to have their sex assigned, now ask for a hormone readout. They categorise athletes into male and female not on how they were born and not on their chromosomes or how they look internally or externally.

This process segues uneasily towards athletes being told they must take certain drugs in order to compete – pretty dire messaging given ongoing doping issues.

But some trans activists, such as the leading Canadian cyclist and academic philosopher Dr Rachel McKinnon, believe the requirement to suppress testosterone with drugs should be scrapped altogether. She argues “fairness cannot require the elimination of all significant competitive advantages”.

Other groups believe that if a person does not identify with the sex they were assigned at birth they must be able to transition socially and participate in sports consistent with their gender identity.

They argue that divide and conquer gets it all wrong, that excluding trans women hurts all women, that a person’s genetic make-up and internal and external reproductive anatomy are not useful indicators of athletic performance.

Rugby, inevitably, has stepped up to face a question where there is currently no clear answer. Geneticists, endocrinologists, ethicists, coaches, campaigners and athletes agree to disagree. The notion of a tape or a whistle as an antiquated metaphor for the certainty and simplicity of another time seems further away than ever.