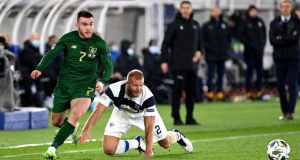 Stephen Kenny may not be feeling it right now but he has been lucky in one regard over the past week or so: the likes of Slovakia, Iceland and Northern Ireland are having a worse Nations League than his side and so, with just November’s games to go now before the final places in pots are decided, the Republic of Ireland are just about clinging to their second seed status for next month’s World Cup draw.

As things stand, Ireland occupy the last of 10 places in Pot Two with a lot of movement still possible, but three points might well be enough to secure the second seeding with the prize being group games next year against the likes of Hungary or Greece rather than Switzerland or Poland.

With Bulgaria due in Dublin next month, a win and perhaps more than the minimum of one goal that would be required seems achievable and so the November window could end up being regarded as a success even if nothing is taken from the other group game in Cardiff.

To do it, of course, Kenny will probably have to have something like a normal quota of players who are match fit and available to play, something he has not had the luxury of so far.

The games to date have clearly not gone brilliantly and yet in terms of the performances, there was a clear improvement evident in the more recent three despite all of the chaos encountered with Ireland creating far more by way of clearcut chances against Slovakia and Finland.

Still, Kenny’s assertion that his side had not deserved to lose in Helsinki is dubious. The home side may not have been much better but they took one of their chances which ultimately entitled them to get more out of the game than Ireland.

Outside of the minority of the population that really values what the new manager had previously done in the club game, there is a sense of ongoing scepticism about his ability to really do the job. Clearly, he could do with results improving so that the pressure does not begin to build at a ridiculously early stage of the World Cup qualifying campaign, but there are positives already to point to.

And though there have been teething problems with this attempt to transform the style, the signs are encouraging

Difficult as it is to judge different games, against different opponents under different coaches, it is perhaps worth comparing Wednesday night’s performance with the one in Georgia during the last campaign.

Notwithstanding the fact that the Georgians are currently one win away from a place at next summer’s European Championships, Finland are, by just about every measure, a better side - currently 33 places higher in the world ranking ladder. But with the division of possession equal (53-47 in favour of the hosts) in the two matches, Ireland attempted nearly 25 per cent more passes, completed a far greater proportion of the ones they played and managed more chances on target in Helsinki than Tbilisi. This despite the fact that, realistically, winning the one last year mattered more.

It is obviously not just about the numbers though. Where Ireland have long had a tendency to knock the ball around rather unadventurously in the safer areas of the pitch then panic a bit when put under real pressure, the team under Kenny is clearly trying to use its possession more effectively. And though there have been teething problems with this attempt to transform the style, the signs are encouraging.

Nobody can be under any illusions at this stage about the problem that exists in terms of the lack of a goalscorer. This may well prove to be a persistent stumbling block for the Dubliner for it is simply not in his power to create one at this level, but it seems rash to be rushing to judge him after a window in which he was not once able to field his first choice frontline together.

Adam Idah continues to look like one for the future but he has had chances over the past month or so that he might well not have been given in other circumstances. Again, a straight comparison is difficult because of the number of players ruled out for one reason or another and the current rules allowing for additional substitutes, but Kenny has used 33 players in his first five games in charge compared to 19 during the same phase of Mick McCarthy’s second spell in charge.

There is a different air about it all too . . .

McCarthy had a strong sense of what his best XI was but it was not, as things turned out, good enough to achieve the only real objective. It is arguable that Kenny has no choice in the matter, but there is more evidence of an eye to the future . . . inevitable perhaps given that he hopes to be around a while, but McCarthy knew his time was limited from day one. Even setting aside the crazy amounts of money involved, that arrangement is not made to look better by hindsight.

Kenny, in any case, has to date handed four competitive debuts in five games compared to McCarthy’s two (Aaron Connolly and James Collins) in eight while the one of those two still involved - Connolly - has been made an automatic starter. There is a different air about it all too, with the new manager conveying a real sense that he believes in this young talent as having the potential to become, as he put it on Wednesday, important to the team in the future. Previously, it often seemed, new players were tried because managers had run out of alternatives, or were under external pressure and in some cases wanted to be reassured about their existing preferences.

Ireland remain some way behind Wales on this front with Ryan Giggs having three 20-years-olds alone in Ben Woodburn, Matthew Smith and Ethan Ampadu who, despite struggling to get a look in at the clubs that own them - Liverpool, Manchester City and Chelsea respectively - have 39 caps between them.

It might be argued that they have a slightly better crop of players but that is yet to be determined in terms of the wider group. Dara O’Shea and Jason Knight are, at least, on their way and there cannot be a member of the Under-21 squad left who does not believe he too can get an opportunity. Well, maybe Michael Obafemi still privately believes he is being harshly treated by the new manager but a few club goals and the Southampton striker would become impossible to ignore.

Kenny could certainly do with someone demanding his attention in that way during the coming weeks for the team’s continued lack of goals still threatens to overshadow the progress he has achieved so far. It seems certain to still be an issue when the World Cup qualifiers get under way and there will be new challenges then, like opponents who are significantly better on paper than the ones currently being encountered. Beat the Bulgarians and at least it might only be one, though.