Watching these extraordinary athletes has been therapeutic but questions linger 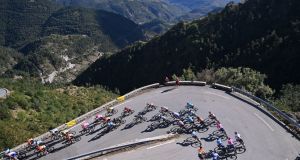 They snake along the winding roads of rural France. Their flashing energy, our slumbering indolence. It’s all so super curative, fantastically restorative. Photograph: Marco Bertorello/AFP via Getty Images

Afternoon therapy in the wellness lounge has been going quite nicely thank you. They snake along the winding roads of rural France. Their high work rate, our drawn curtains, their flashing energy, our slumbering indolence. It’s all so super curative, fantastically restorative. The humdrum beginning to each stage a kind of working out of the narrative to follow. Then it all goes to hell in a sprint finish.

Some of them having a chat and lunch in the middle of the bunch with their team-mates. The Kazakhs in light blue livery. Easy on the eye, them ones.

For 21 days they are at it with two rest days. Since the Grand Depart from Nice on August 29th they have being cycling an average of the distance between Belfast and Dublin each day, or, an 8,000 calorie daily workout of 183km (114 miles).

The longest was the 12th 218km stage from Chauvigny to Sarran, the shortest the 36km mountain time trial this weekend between Lure and La Planche des Belle Filles, a ski station in the Vosges mountains.

Dreaming of the finish in Paris, the climb has an average gradient of 8.5 per cent, but a short stretch just below the summit at one-in-four will sap every last sinew of drive. Legs will die.

In 19 days of racing they will have covered 3,325km. But that doesn’t tell the whole story. The mountains, the heat, the attrition rate. It’s compelling. To watch the teams bunch or the lone break, cutting through the air for their star sprinter to bring him up to the front for a decent shot at a stage win. Their energy belongs to him.

The full-on conversations they have during the race, the down time, the freewheeling, the down-hilling, the mind reading over the course of three or four hours each day. The Tour de France has been therapeutic, remedial and healing. You pull open the curtains and, hey, it was a sunny day.

But as they cycled through a sunflower field on an idyllic stretch of flat road last week a friend broke the silence of a lazy afternoon. Are they still taking the juice, he asked?

Well, punch a bag of vomit if that’s not sassy talk. The arrogance of 1998 is long gone. The protests over the police raids on their steroid and EPO store houses. The Tour de Farce. The struggles not with conscience but the tactics of eluding. The conflict not with regulations and health but avoidance and Trumpian disregard from doctors, quacks and healers about the health of young men.

When we ask ourselves are we in the mood to forgive and believe, cycling asks the forgivers to accept that the savage challenge they used to face with drugs, they now do it clean. Except this year they go for further and longer than they did in 2003 and 2004 and 1988, one of the golden years of doping.

It’s cynical stuff but to ask whether a bowl of pasta and a leg rub is enough to get them over a mountain the next day is what comes from a legacy of epic forgery. When you watch the 176 riders over four hours and see some take off and others blow up and others race up a slope that rises one foot for every four travelled, you begin to understand the extraordinary and ask – how do they do it?

What should we think of them in the driving rain or the brutal heat of the plains?

Athletics is in the same twilight zone. Rugby is suspect. The difference there is the athletes caught in cycling and athletics are top names. Those caught in rugby are, Chiliboy Ralepelle and Aphiwe Dyantyi aside, are for the most part never-heard-of players.

The narrative sold to the public in rugby is those playing for contracts and an entry point to the professional game are the ones doping. More kids are caught at schools Craven Week (six in 2018, three in 2017, four in 2016, five in 2015 and three in 2014. All for steroids) in South Africa than in the Rugby World Cup, where no one is caught. That they stop cheating when they leave school is not a believable narrative.

But cycling has embraced the biological passport. It profiles athletes’ individual blood values. There is a baseline that their tests can be compared against. That’s a deterrent. What experts say is passports have dialled back but not stopped doping.

So what is the answer as we come to an end of watching them sail past the encrustations of a granite range or layers of limestone, glide alongside the rivers of central France and across gorges that in months will become ski resorts?

What should we think of them in the driving rain or the brutal heat of the plains or when they start the day’s racing in a rising morning mist and chill air on their way to conquer some brutal peak or begin a rollercoaster ride over a series of mountains, throwing themselves down each side only to begin the sequence of inhuman switch back climbs again?

The Inuit have a word “iktsuarpok” for the feeling of anticipation when you’re waiting for someone to show up at your house. In the final days of this year’s tour maybe someone can add to the lexicon of the cycling world.

A word maybe for “the thrill of watching them tailgate along a high road across a meadow and then wonder if it is all still make believe”. That would help next year’s afternoon therapy nicely.