Johnny Sexton nominated for World Rugby’s Player of the Decade 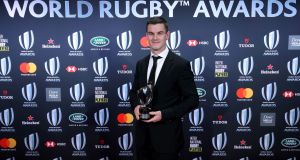 Ireland captain Johnny Sexton is one of eight nominees for World Rugby’s Player of the Decade award. The other nominees are Richie McCaw, Tierry Dusatoir, Dan Carter, Kieran Read, Brodie Retallick, Beauden Barrett and Pieter-Steph du Toit - the winners of the award since 2010.

The Leinster outhalf was named World Rugby Player of the Year in 2018. His former provincial and international team mate Jamie Heaslip is also up for an award - his try against Italy from the 2016 Six Nations campaign is nominated in the ‘Men’s 15s Try of the Decade’ category.

While Alison Miller has been nominated for the ‘Women’s 15s Try of the Decade’ for her effort against New Zealand at the 2014 Women’s Rugby World Cup. A score that helped secure an historic first ever win over New Zealand.

Fans can vote online until Sunday October 25th, while the men’s and women’s Teams of the Decade will be selected by a panel of ex players including Brian O’Driscoll and Fiona Coghlan.

Unbeaten Khabib to retire after UFC 254 win over Gaethje 10:12
Justin Thomas finishes with a kick to lead by one in California 07:46
Ulster aiming to douse Dragons’ fire and extend unbeaten start 06:00
A season like no other: The key games that helped Shamrock Rovers secure an 18th title 00:18
Liverpool come from behind to beat Sheffield United 00:19
Crossword Get access to over 6,000 interactive crosswords