GAA brace for start of intercounty season with no little trepidation 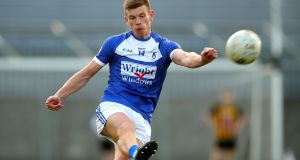 John Heslin tweeted about his concerns over the resumption of intercounty fixtures. Photograph: James Crombie/Inpho

With nerves fraying around the country, as coronavirus cases climb inexorably, the GAA remained on course on Thursday evening to recommence this year’s intercounty season at the weekend with the return of the Allianz Football League.

If the mood is sanguine, there’s also acceptance that the association has to be guided by public health advice and if Level 5 is declared then the season is in all likelihood over but in the meantime the fixtures go ahead.

The view is that there was little or no transmission because of on-field interactions in the county championships and that the protocols surrounding the playing of matches have to date proved detailed and effective.

Individual counties have had difficulties this week. Fermanagh’s application for a postponement of their Division Two match with Clare in Ennis was turned down by the Central Competitions Control Committee despite an outbreak of Covid in the panel but the county hopes to be able to travel.

“At the minute we’re trying our best to fulfil the fixture,” according to county secretary Tom Boyle. “We met on Wednesday night and will make the final assessment on Friday, as players start to come out of Covid restrictions. The plans would be to stay down there but players would travel individually.”

In Wexford, county chair Derek Kent said that both football and hurling panels were tested for coronavirus this week with two hurlers as positives but not four footballers as reported.

“I knew there were issues in Wexford after the county football final - as there were in other counties - a week and a half ago. To be fair to Croke Park they came up with an excellent rapid testing system and we decided to test everyone, both panels. We called them in to the centre of excellence and the footballers were clear and we got two hurlers positive.”

Four positives in the extended football panel had been uncovered last week when some club players had been tested but there have been no further cases.

“I had been concerned by three things,” Kent said. “One, the fall-out from social gatherings after the county football finals, which had been totally inappropriate. Secondly there has been a high case rate in Wexford in general over the last seven days and the other one was the comings and goings of students attending college.

“It focused the minds.”

It was also revealed on Thursday that Longford’s appeal for a neutral venue rather than having to travel to Derry, currently a Covid hotspot, was turned down by the CCCC. The match will go ahead on Saturday at Celtic Park at 4.30.

Meanwhile, the Gaelic Players Association is expecting to collate results on Friday after conducting a canvass to get members’ views on the staging of the 2020 intercounty season. It is believed that the players’ body is deeply concerned about player welfare in the circumstances and anxious to balance that against the desire to return to play.

Coming days before fixtures are due to recommence with the resumption of the Allianz Football League, the exercise is more of a consultation process than a plebiscite.

Responses to the questionnaire circulated on Tuesday evening will indicate what the views of players are at a stage when the public health environment is deteriorating all the time. In order to maximise responses, the GPA has allowed 48 hours for the process and it is expected that results will be analysed on Friday.

The questionnaire was as follows:

“In your opinion, is your county board effectively implementing the Covid-19 intercounty return-to-play protocols to ensure a safe training/playing environment for you?

“If no, indicate what specific changes are required to make your training/playing environment compliant with the Covid protocols.

“Which of the following options reflects your opinion for the upcoming 2020 season?

1) I want the season to proceed.

2) I want to play only if the implementation of the Covid-19 protocols is improved.

3) I do not want the season to proceed.

“If the Covid-19 situation continues to deteriorate, do you support the NEC [the GPA’s National Executive Committee] making a decision on the players’ behalf about the continuation of the season?”

Amid the GPA process, there was a tweet from Westmeath’s John Heslin on Wednesday questioning the resumption of intercounty fixtures.

“At what stage does the ‘Intercounty return badly needed in these grim days’ commentary end? I am concerned from a health and welfare perspective, both individually and collectively, for those contributing to the inter-county season,” the tweet said.

Other anecdotal evidence from players doing media interviews would appear to indicate that many are looking forward to the return of the games.

Depending on the responses the GPA may decide to liaise with counties and players if there are concerns about the implementation of measures to counter coronavirus.