World Cup 2026 to be hosted by USA, Canada and Mexico

Morocco has now bid and lost out on five occasions, this time to ‘United 2026’ bid

A joint bid from Mexico, USA and Canada have won a bid to host the 2026 FIFA World Cup ahead of Morocco. Video: FIFA TV 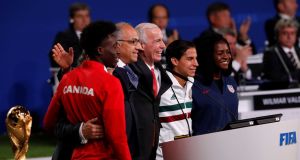 Officials supporting the joint bid of United States, Canada and Mexico to host the 2026 World Cup, take part in a presentation during the 68th Fifa Congress in Moscow. Photograph: Sergei Karpukhin/Reuters

The 2026 World Cup will be held in the United States, Mexico and Canada after Fifa’s congress voted on Wednesday to back the tri-nation joint bid for the tournament. The North American bid beat the rival Morocco proposal, winning 134 votes to 65 for Morocco.

The United bid involves 16 host cities — from Boston and New York in the east, to Los Angeles in the west, and Guadalajara and Mexico City in the south to Edmonton in the north — and existing stadia.

The largest is AT&T Stadium in Dallas, which has a 92,000 capacity. Only 20 of the slated 80 matches will take place outside the United States, with 10 in Canada and 10 in Mexico.

All matches from the quarter-finals onwards will be in the USA.

“It’s a bit emotional for us today,” US Soccer president Carlos Cordeiro told the Fifa Congress. “Thank you so, so very much for this incredible honour. Thank you for entrusting us with the privilege of hosting the World Cup in 2026.

“The beautiful game transcends borders and cultures. Football today is the only victor.

“And in that spirit we wish all Russian hosts and all the teams competing here the very best of luck.”

1 Saracens to accept second 35-point deduction and effective relegation
2 Welcome to Iten in Kenya – home of champions and cheats
3 How do Klopp’s Liverpool measure up against greats of past?
4 TJ Reid reveals the fresh secrets of his consistency
5 Sonia O’Sullivan: How did Melbourne become the world’s most polluted city?
Real news has value SUBSCRIBE
Crossword Get access to over 6,000 interactive crosswords