Dan Leavy and Garry Ringrose back to face Australia 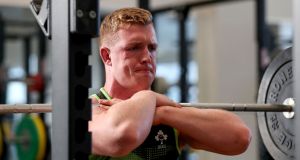 Dan Leavy will be tasked with taking on a formidable Australian back row. Photograph: Dan Sheridan/Inpho

With a view to neutralising David Pocock’s impact over Irish ball, Dan Leavy returns at openside for the second test against Australia in Melbourne this Saturday.

Ireland coach Joe Schmidt will seek to salvage the series and eight changes are expected to the starting XV, one positional, as Bundee Aki makes way for Garry Ringrose and Robbie Henshaw switches from outside to inside centre. Schmidt will name his team on Thursday morning.

Johnny Sexton ahead of Joey Carbery at outhalf was expected while Jordan Larmour and Andrew Conway remain on standby in case Keith Earls fails the return to play protocols following a Head Injury Assessment 25 minutes into last weekend’s bruising encounter.

The bench is still to be finalised so Jack Conan, Jordi Murphy, dropped for Leavy, and the uncapped Tadhg Beirne are hoping to provide backrow cover. Beirne could be used as the second row replacement if Schmidt decides to stand down Iain Henderson and Quinn Roux.

With Rory Best, who turns 36 in August, unavailable due to injury, O’Mahony and Sexton will share the leadership duties.

The Australian media are reporting an unchanged Wallaby XV.

Over 28,000 tickets have been sold for the AAMI Park (capacity 30,050) despite the test match clashing with the Socceroos opening World Cup game against France.