It's finally dawning on people, it'll take a long time to reverse damage that's been done 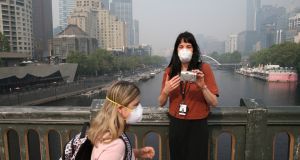 Have you checked the AQI? There is one new variable to consider when exercising around Melbourne this week, and that’s the Air Quality Index. It’s impacting on all of us right now from Olympic athletes to Australian Open tennis players to anyone trying to get outside for a little exercise.

As a result of the bushfires raging throughout the state of Victoria for the last number of weeks, Melbourne is now experiencing days where the entire city and suburbs are shrouded in a smoky haze.

On Tuesday morning Melbourne had the worst air quality of any city in the world, twice the level of pollution measured in New Delhi and Shanghai, cities renowned for their extreme levels of air pollution.

Qualifying competitions for the Australian Open tennis were put on hold in the hope that there would be a change in air quality as the day progressed.

Elite athletes training here are familiarising themselves with numbers relating to AQI. The last time I remember that was when running in India, China and Ethiopia, some of the most polluted cities in the world.

Athletes are generally more concerned about the weather forecast, high temperatures or wind and sometimes storms, but maybe the AQI is something they’ll be getting more used to.

The AQI measures the level of pollutants in the air, with ranges from 0-500 and a colour code to help determine the potential for adverse health effects when exercising and spending time outdoors, and deciding what activities are safe to proceed with.

It takes a lot to stop top athletes from training, especially when specific sessions are in place. Often the thinking is that you have to practise in all conditions, especially if you turn up for the Olympics on a day that is less than ideal conditions.

Tuesday in Melbourne created a lot of uncertainty amongst coaches and athletes: what should we do? The air had already reached hazardous levels, right up there in the dark purple range over 300, where it is recommended that everyone should avoid exercise and remain indoors.

I was just up and dressed to run when I received a message from a friend to let me know that she would definitely not be running as the air quality was deemed hazardous.

We were due to meet at the grass track and open up the gates for the Melbourne Track Club athletes and other internationals who are now based in Melbourne due to the cancellation of the Falls Creek altitude training camp as a result of bushfires in the area.

In the end I drove 80km down to the coast where the air was clearer, mainly because I can’t cope with being cooped up inside all day.

We’ve had plenty of extremely hot days in Melbourne over the years where temperatures reach over 40C. I remember when I first came here in 1995 it felt like we were running in an oven, hot and uncomfortable, although it never stopped us.

Tuesday was the first day I can remember where it just didn’t feel right to even consider running outdoors. Perhaps with all the hazardous warnings and being bombarded with headlines of the worst air quality in the world, you stop and think twice about it.

The tennis starts this week, and even though a storm passed through on Wednesday evening and cleared the air, the smoke was back in the city again soon after. It expected to be clearer on Friday, but the smoke is expected back again on Saturday, so it could make an appearance at some stage during the tennis tournament.

I expect the organisers will have some criteria in place before it starts, just like they have a heat policy and when to close the roof. It may become the Australian “closed roof” for the Open.

Back on their feet

There is continual talk on the radio about climate change, and whether enough is being done in Australia. You do get the feeling that Australia views itself as a modern country, and it is doing everything possible to help the fire-affected areas – there is so much money to get people back on their feet. Yet there is always people questioning if it could have been avoided.

This is the biggest debate I have ever experienced on the fires, and also the greatest number of fires. I’ve never known them to go on for so long and have such an impact on the air even with the main fires so far away.

This has to be the result of global warming, especially as the smoke is suffocating the cities and taking so long to diffuse due to the constant unbearable heat day and night. The cooler overnight temperatures are also very short-lived.

There must be some reason for this, some reason how we have got to this stage. It has happened over a very gradual period of time, and maybe only now is it finally dawning on people that it will take a long time to reverse the damage that has been done. We have neglected what damage all the conveniences of life have done to the planet.

It’s a global problem, but every country has to look at its carbon footprint and what it can do to pull back and slow down the global warming.

It’s impossible to back-track now, and maybe the best we can hope for is a slow down. Perhaps we can be more pro-active and preventative rather than re-active, which is what seems to have happened in Australia with this season’s bushfires.

There is always some a sector that doesn’t take global warming seriously because it’s not quantitative and measurable in a historical manner.

I think these fires are making people more aware, but it will take strong leadership for people to make significant changes and to encourage change – people need to see the positive effects this has on the environment.

There also needs to be motivation and feedback; just like in sport you work hard and get a tangible result, then you are encouraged to work harder.

Global warming needs some markers and tangible positive results to get everyone on board, and I think this is where Australia is not as united as it should be. The message is not being delivered from the top, and instead it is coming down to smaller groups to make noise and get noticed.

Have you checked the AQI?