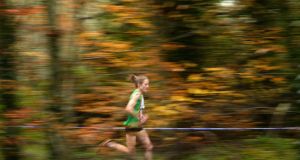 Fionnuala McCormack: national women’s champions will be part of a strong Ireland team in Lisbon on Sunday in the European Cross-Country Championships. Photograph: Dara Mac Dónaill

I was back in the old familiar grounds of St Mary’s National School in Cobh on Monday, invited to deliver and partake in The Daily Mile which is fast impacting on the health and wellbeing of primary schoolchildren all over the country.

I’ve been back to visit my old school many times before, on the return from major championships, but it was so much more special and impactful to follow my talk to the school children with some action in the playground.

That’s the aim and purpose of The Daily Mile, to show primary schoolchildren how important movement is each day. A small space, 13 laps to the mile and it doesn’t have to be all running; we skipped and hopped and jumped and most importantly talked and laughed in the fresh air for 15 minutes.

That’s all it takes to refresh the mind and body with mini breaks throughout the day. This is also the starting point for most young children and, even though it may feel difficult to get started, with regular practise it becomes routine and part of the school day that can lead to greater challenges.

In Cobh, the junior Parkrun over 2km also takes place every Sunday morning, and is already well established. It still takes effort and commitment from parents and volunteers to ensure this runs smoothly each week to provide the initial introduction to health and fitness for young children.

Running is one of the basic components of training in most sports; it’s the simplest and most efficient way of developing an athletic body. There were times when we used to run to school and home, some of us running home for lunch also, but this is not so common now in the changing world we live in.

Then you need the inspiration for these children to keep motivated, and that’s where success at something like the European Cross Country in Lisbon can give young people a lift and plant the seed in their mind to dream big. When you see it you just might be able to do it one day too.

There is a full spread of Irish teams competing on Sunday, men and women. Just nine weeks since the World Championships in Doha, it’s a quick turnaround for any athlete taking a break before ramping up the training again ahead of the 2020 Olympic year.

Ciara Mageean is the sole Irish athlete to attempt the feat of running this Sunday’s European Cross Country in Lisbon, after Doha and with one eye already on Tokyo. But the lure of going back to the basics of the sport and linking up with an Irish team is always tempting.

That’s especially the case when multiple European individual and team medallist Fionnuala McCormack is on the team and with just three athletes to score, and Aoibhe Richardson fresh off a 19th place at the recent NCAA cross country championships also involved, there is a chance the women could get onto the podium.

Mageean should find the course more favourable than the slippery sand and mud in Tilburg a year ago. but it will take three athletes in the top 25, and McCormack chasing an individual title, to secure any chance of a team medal in Lisbon.

The Under-23 women’s race could deliver success following on from the recent NCAA Division 2 cross country where Adams State University swept the podium and took the team title with Stephanie Cotter, Eilish Flanagan and Róisín Flanagan, all lining up this weekend. It will be a test to see where the US cross country standards compare or contrast with the European Cross Country fields.

One thing for sure is that the European Cross Country will bring us back to grassroots where the shoe technology is less likely to have an impact than it has in recent road races, where records are being set across all distances by athletes swearing the carbon-plated Nike Vaporfly shoe, the “next percent” or maybe the next level.

It’s clear we are entering an era where road and track records can’t be compared to generations before based on pure athletic ability. There is a clear and significant improvement in road race times throughout 2019 with the majority of athletes favouring the Nike shoes and other shoe companies also delivering a carbon plate shoe. A bit like a carbon fibre bike, the benefit is best reaped on a smooth, flat road. Athletes sponsored by different brands have even been colouring black the bright pink and green shoes so as not to get left behind on the start line.

Maybe it is just a progression in athletics like we have seen down through the years with the evolution of athletics tracks and equipment – if you look back to the early days of athletics and compare the times back then to what athletes run now.

Lisbon can and should feel like a level where Irish athletes can be competitive. This time next year, the event will take place at the Abbotstown course in west Dublin, and now is the time to put in place structures to ensure we have teams and individuals that can achieve success on the European stage on Irish soil.

It should be the goal of every elite Irish distance runner to be there competing and ensuring it is difficult to make the team and push standards to a higher level than ever before, attracting young athletes from all over the country to see what is possible when you dream big and work hard.

There needs to be a European Cross Country panel put in place after this Sunday’s event, with a proactive coach and manager to build a core group of athletes with experience, setting the standard for those that aspire to be a part of the team for 2020.

There is no point waiting to pick the team on the eve of the championships, but through a broad squad get the idea in the minds of athletes from a long way out that this is what they are working towards.

It’s also about maintaining strong links and support over the next 12 months, with the ability to invite more athletes in so that there are more than the required numbers to make up full teams and there is competition and fear that athletes may not get a run because someone else wants it more.

This is an opportunity to build on success of the past and ensure the delivery of the most successful European Cross Country for Irish athletes on Irish soil. If we build it they will come and if they see it they can be it. For the future of Irish athletics let’s not let this opportunity go to waste.