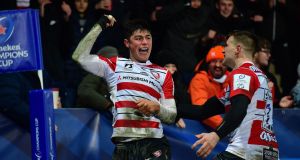 Gloucester’s Louis Rees-Zammit has been named in the Wales squad for the Six Nations. Photograph: PA

They are joined by three more uncapped players in Sale Sharks prop WillGriff John, Wasps lock Will Rowlands and Scarlets wing Johnny McNicholl, and there is also a recall for scrumhalf Rhys Webb.

Webb last played Test rugby just over two years ago before joining French club Toulon and ruling himself out of Wales contention because he did not meet the minimum 60-cap selection criteria for players plying their trade outside the country.

Tompkins, 24, represented England Saxons in 2016 and is an England Under-20 World Cup winner, but he qualifies for Wales through his Wrexham-born grandmother.

Despite Tompkins playing for the Saxons, he was not ‘captured’ by England because their opposition — South Africa A — were not South Africa’s officially recognised international second team at that time.

He will give coach Wayne Pivac an additional midfield option, with Scarlets centre Jonathan Davies sidelined for the entire Six Nations due to injury and Ospreys’ Owen Watkin recovering from a knee problem.

Watkin is named in the squad, along with Scarlets-bound Saracens back Liam Williams, who has not played since suffering an ankle injury during the Rugby World Cup.

Rees-Zammit, meanwhile, has lit up English rugby this season, scoring nine tries across 10 games for his club.

And that blistering form has attracted Pivac’s attention, with the New Zealander naming a 38-man squad for his first campaign since succeeding Warren Gatland.

Tighthead John, 27, is rewarded for consistent form in Sale colours, although Rowlands is more of a surprise selection, while McNicholl started Wales’ non-cap game against the Barbarians in November.

Elsewhere, fit-again Bath number eight Taulupe Faletau — who missed the World Cup due to a collarbone injury — is back, along with recalled Gloucester back Owen Williams, but there are no places for props Nicky Smith and Samson Lee.

Pivac said: “We are really excited to be naming our Six Nations squad and kicking the campaign off.

“A lot of time and effort has gone into selecting the squad. All of the coaches have been out and about, seeing players in training, speaking with them, and we are pretty excited with the group we have got.

“We do have a couple of injuries, but we flip that into seeing it as an opportunity for some new players to impress, with not only the Six Nations in mind, but also longer term and for 2023.

“The Six Nations is hugely exciting for me. It is something I grew up watching from afar and it has such history attached to it, I’m really looking forward to the campaign.”