Sonia O’Sullivan: A day in my life at the Melbourne Cup

After 24 years on my doorstep, I sampled my first taste of the Race that stops a Nation 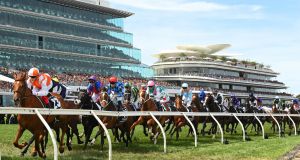 This was Craig Williams’ 15th attempt at winning the Melbourne Cup, and he bravely fought to hold that inside line along the rail on Vow and Declare. Photograph: Quinn Rooney/Getty Images

It’s not quite half my life but for almost half the last 24 years now Melbourne has been my home from home. Familiar in every sense, only all through that time I’d never once walked through the famous gates of Flemington racecourse on Melbourne Cup day.

Until this Tuesday – the first in November, and one of the biggest days for everyone in the city. The Melbourne Cup is every bit as synonymous with this city as the Sydney Harbour Bridge is with that city. It’s also one of those events that is a lot more than a horse race: it’s the Race that stops a Nation.

Just like any famous tourist attraction on your doorstep, you know it’s there, but there never seems to be any sense of urgency to visit. Sure you can go there anytime.

There’s also been an event or a party or just a trip to the beach planned on “Cup Day” and I never really thought it would be any different to make the effort, get dressed up, and go along. Not quite the fancy hat and heels, but more than my usual Tuesday outfit, just enough to fit the dress code to the members stand.

It’s all about connections in horse racing; those connected to the horse, the owners, trainers, jockeys, and everyone that takes care of the horses. Especially those horses that come from overseas and have to spend weeks in quarantine and recover from the travel across many time zones.

Then there are the connections to the fans that fill the stands. For many it’s a big day out, planned months in advance; for others like me it can be a last-minute opportunity through a connection.

That’s how it finally came together. My local physical therapist Bryan Kent is from Wexford, now living in Melbourne, and a family relation of Aidan O’Brien. With that he secured a few stand tickets in the exclusive members section, where you can turn up when you like, and not feel pressure to get to the course early in the day to hold a spot so you can catch a glimpse of the horses as they race past.

Many seasoned Melbourne Cup revellers set up camp just inside the rails with their picnic blankets. It’s a nice place to be if you’ve the motivation to get up early and stake your claim on a spot of grass, with your very own racecourse frontage. A nice place to relax between races then jump up for the action.

It would normally take me about an hour to get to Flemington by train. On Cup day, with all the special trains running direct from Flinders Street, I was there in record time, so could cruise around the decks of the members stand and check out the scene before meeting up with Bryan and his family.

The thing that surprised me was the big gaps of time between races. That gave time to get up and walk around, visit the parade ring, the mounting yard, and even the special presentation to the crowd of the Melbourne Cup jockeys ahead of the race, the AUS$8 million highlight of the day.

It’s the chance to align yourself with a horse, so you have something at stake as the crowds rise to watch the tight pack of horses edge each other out as they near the finishing post.

I was still trying to work out which horse to pick for the race: with 24 horses lining up carrying various weights it can all turn out to be a bit of a lottery. I had the weekend paper and am influenced as much by the names as the form, trainer, jockey and heritage of the horse.

I had still to make my mind up on which horse as they were entering the mounting yard, with lots of people trying to get that last bit of inspiration and connection with a contender before parting with any cash. There was no shortage of bookies and betting machines happy to take your cash all the way up to race start time at 3pm.

I settled on Master of Reality, a play on words as I ambled around this very different world of fashion and fun – and probably a few steps away from the reality of everyday life for most. Also a bit of loyalty to a horse trained by another our own Joseph O’Brien, son of Aidan.

The last thing I remember from the mounting yard after the jockey presentation was watching Craig Williams, about to ride on local horse Vow And Declare, taking his time chatting to friends and family and stopping for photos. He was the last jockey to leave before the horses were led around.

I thought he looked so relaxed, seemed to be really enjoying the occasion, and didn’t seem too nervous about the task that lay ahead. I quickly checked up Vow and Declare, only should’ve looked a bit closer, as I couldn’t believe it when he edged past the finishing post first, just ahead of Master of Reality, who was later relegated to fourth after a stewards protest for impeding Il Paradiso on the final turn.

It makes you wonder what could’ve been, yet it’s all very reminiscent of what happens so often in the final stretch of an 800m race, when athletes hold out for that clear run on the inside.

This was the 42-year-old Williams’ 15th attempt at winning the Melbourne Cup, and he bravely fought to hold that inside line along the rail. Frankie Dettori was making his 17th attempt to win on Master of Reality, only again found himself denied.

All this after locals had been venting their frustrations at the number of international horses turning up to steal the Cup the past few years: an Australian-owned-and-trained horse with an Australian jockey turned up and won the cup back for the first time in decade.

It’s all people talk about in Melbourne at this time of year, and not everyone is favourable either – with animal rights protestors growing in number each year, yet the Melbourne Cup carnival rolls on.

The crowd this year was just over 81,000, not even close to a record. It was even fewer than last year when conditions were less favourable for most racing fans who would not be under cover throughout the day.

The night before there also was 12mm of rain in a short period of time, yet the track, even though soft, never really cut up throughout the day. The perfect racecourse to produce the perfect result for Australian fans.

One of the many messages I received with a tip for the day came with the words: “If an Australian horse wins it’ll be a miracle”. I wonder how many people got that message and what a twist of fate. Maybe miracles do happen after all, this horse certainly a master of reality.