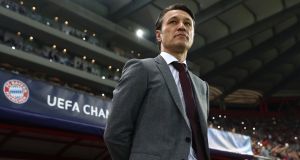 Ralf Rangnick, Erik ten Hag, Arsène Wenger and Max Allegri are on Bayern Munich’s list of candidates to replace Niko Kovac, who left the club after the 5-1 defeat at Eintracht Frankfurt.

The news of Kovac’s departure did not come as a great surprise, as he had been under pressure for several weeks and Saturday’s heavy defeat was the last straw for the Bayern hierarchy. Kovac took over from Jupp Heynckes in July 2018 and won the domestic double in his first season in charge. During this campaign he did oversee a remarkable 7-2 win at Tottenham in October, but defeats against Hoffenheim and Frankfurt and draws against Hertha Berlin, RB Leipzig and Augsburg meant Bayern fell behind in the Bundesliga.

They are fourth, only four points behind the leaders Borussia Mönchengladbach, but performances have been so poor the Bayern board decided to act on Sunday morning.

Rangnick is the frontrunner for the job, and is interested, but he is under contract as the head of sport and development at Red Bull. The 61-year-old has extensive experience of the Bundesliga, having been in charge of Stuttgart, Hannover, Schalke and RB Leipzig among others, as well as being the sporting director for RB Leipzig and Red Bull Salzburg.

Bayern discussed appointing Rangnick at the end of last season but decided to keep faith in Kovac. The situation at Bayern is complicated by the president, Uli Hoeness, stepping down on November 15th, but he will still have a say in who they appoint next.

Wenger is another candidate, possibly taking over until the end of the season. The former Arsenal manager is held in high regard by Bayern and speaks fluent German. They are likely to look for experience after Kovac’s appointment backfired. The 48-year-old had been in charge of only one club side, Eintracht Frankfurt, before taking charge of Bayern.

Ten Hag, the Ajax manager, is also on the shortlist having reached the Champions League semi-finals with the Dutch club since being appointed in 2017, and knows Bayern well after coaching their second team between 2013 and 2015. Bayern know they have no chance of getting the 49-year-old now but could try in January or at the end of the season.

Allegri is another name interesting Bayern, but they are wary of appointing a non-German speaker after Carlo Ancelotti’s difficulties in 2016-17. Allegri may still have a chance to get the job, however, as he is represented by Giovanni Branchini, who has dealt extensively with Bayern in the past and is trusted by the club.

Finally, José Mourinho has been linked with the job but Hoeness, for one, does not want him at Bayern.