Aki and Carty set for Connacht returns against Leinster on Friday 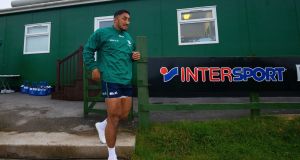 Bundee Aki at Connacht’s training session at the Sportsground in Galway on Tuesday. Photograph: Tom O’Hanlon/Inpho

Connacht are expected to welcome the return of their World Cup players Jack Carty and Bundee Aki for Friday evening’s first interprovincial of the season against Leinster at the Galway Sportsground (7.35pm, TG4, Eir Sport).

Coach Andy Friend says the two are raring to go in a fixture that will provide his side with a measure of their growth this season.

Carty is expected to take over the No 10 jersey, giving 22-year-old Conor Fitzgerald a welcome rest after the opening five matches. Colby Fainaga’a is likely to return to backrow action after recovering from a knee injury in the opening match against Scarlets, while Finlay Bealham, Seán O’Brien and Matt Healy have also been declared fit.

O’Brien, along with injured fullback Tiernan O’Halloran and centre Tom Farrell, have agreed contract extensions at the province, which Friend says is a great “accolade for Connacht”.

“They are players who would have attracted attention from other areas, so what’s pleasing for Connacht is they wanted to stay here,” he says. “Both Seán and Tiernan are in our leadership group. We know what they can do on the field, and off it they are growing as leaders, driving standards for us, and it’s important to have local boys who can do that.

“Seán O’Brien came through the Academy, and is a real bit of glue around the place, so it’s important to keep him here. Tiernan O’Halloran, for me, could become one of those in 20 years people are still talking about. He’s our fifth highest capped player with 176, so it’s great to have his signature. And Tom Farrell, we all saw what he did last year and so far this year, so it’s great to have him locked in for another three years.

“They are key to our ambitions and their signings are a great boost for the rest of the squad and everyone who supports Connacht Rugby.”

Friend says Friday’s contest with Leinster will be provide a measure of where Connacht stand, particularly after two defeats to Leo Cullen’s team last season – the RDS outing most memorable for Leinster’s 17-point turnaround after Connacht had led 29-12 with 11 minutes remaining.

“It has not been talked about, we are very aware of it. Whether you were involved or not, you would remember that.

“I think it is one of those games we could have sneaked away with, and we have talked about having to be an 80-minute team on Friday night. If you are a 60-minute team or 70-minute team, Leinster will beat you.”

Trump prefers Jordan to James because ‘he wasn’t political’ 16:45
Mark Selby books semi-final spot after crisis of confidence 13:09
Galgorm Castle resort could rescue 2020 Irish Open 11:25
Iain Henderson out for up to 10 weeks after hip surgery 10:26
Leeds sign teenager Charlie Allen from Linfield 10:08
Here is your handy guide to sport on television this week