Even in the good times when you achieve success, emptiness can creep in afterwards 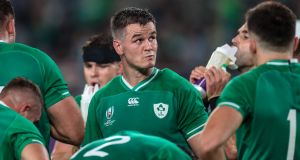 Ireland’s Johnny Sexton dejected after their defeat to the All Blacks in the World Cup quarter-finals. Before the match there was hope the team could once again reach unpredictable heights. Photograph: Billy Stickland/Inpho

My youngest daughter Sophie finished secondary school here in Melbourne this week. It’s the end of the spring term, just some exams to complete, and she’ll be on to the next stage and changes of her life.

It also changes things at home. All of a sudden there’s not the same urgency to get up at 7am, do a few run around jobs before calling Sophie down for breakfast. There’s a little loss of purpose to kick-start the day, it seems, and eventually it all rolls along, just not at the same intensity when there’s a bus to catch at 7:50am, or a drop-off to school by 8:30am.

It’s a state of mind that’s hard to change overnight, and will take time to get used to. Same as any time in your life when the regular daily routine suddenly changes.

It happens in sport a lot: the end of a season, when you’ve reached a goal you set out for the year, or when you’ve come up short and run out of time to get the result you’ve been chasing all year. Or when all of a sudden the tournament is over for you but still going on for others.

Even when you achieve some success there can be a wave of anti-climax. So often the buzz and excitement comes in the preparation and everything that leads to the pinnacle of your sport.

We saw it last Saturday at the Rugby World Cup, when Ireland struggled from the kick-off to compete against New Zealand in the quarter-final, certainly not at the level we’ve seen in recent times.

Up to that point there was hope and expectation the team could once again reach unpredictable heights, and go beyond where any Irish rugby team had ever been before at a World Cup. It wasn’t for lack of preparation, desire or determination; things just never clicked and the team was left fighting for just a little bit of pride, even when the result was inevitably going to be in the All Blacks’s favour.

Afterwards there was that empty feeling: too early to even wonder what next or question why. When faced with this prospect, you can’t just go to bed, wake up the next day and move on. There’s a required period of mourning, weighing up what might have been, what could’ve been, what was lost. No more than for head coach Joe Schmidt as he figures out what to do next.

That emptiness will be felt by each player differently, the coaching staff and to a lesser degree the fans. When you organise your own weekend around a sports event it tends to put a purpose in your day. You want to get things done early, so you can settle down and enjoy the game, and when your team is knocked out, the level of intensity around the dates and game times is lost. Days go by and you remember that there is still the semi-finals and final to go but it doesn’t mean as much and you wonder what to focus on next.

It’s the same for athletes and players across all sports, and the trickle-down effect to the fans and supporters. Some make the effort to travel; those that stay at home and organise gatherings have the banter among friends and work colleagues.

The school routine with Sophie was one of those reliable parameters. Even with two dogs still waiting to go out in the morning there is no strict deadlines, a few minutes here or there but eventually we will settle into a new routine.

I always remember the change from primary school, when first my oldest daughter Ciara and then Sophie moved on to secondary school and didn’t need to be met at 3:30pm each day.

Our first dog Snowy used to sit by the door every day, for weeks into the new school year at 3:20pm ready to walk up the hill, but the routine had changed and his body clock needed resetting. We can learn a lot from dogs and their habits and structure and how it takes time to adjust and adapt to change.

Still, routine makes life easy and change is always a challenge that requires persisting with to absorb into our daily lives.

I was thinking back this week on the first time I ran the Dublin Marathon, an event which this Sunday celebrates its 40th anniversary. For me it began 19 years ago, and the result of a change and a challenge I set for myself.

Even in the good times when you achieve success, you can feel that emptiness creep in and that loss of purpose that you become so used to.

It was shortly after the Sydney Olympics, I went straight to Doha for the Grand Prix 3,000m final, then on to Ireland for what seemed like a string of never-ending parades and celebrations, the Olympic silver medal welcomed home and touched many corners of Ireland. As great as that was, every day I was waking up in a different bed in a different hotel, feeling like you are losing control of who you are and what you do.

As my fitness was slipping away, I needed something to catch me. I wanted to do something for myself to escape and out of nowhere I decided to run the Dublin City Marathon.

It was a much smaller event in 2000 than it is now. I did two long runs on the two Sundays before the race, enough to feel a semblance of myself and do myself justice, maybe even win the race. I never committed to this aloud, just knew it was a possibility, a marker to aim for with a definitive result.

This was not a career move, just an event that would give me something to work towards, an excuse even, to put some structure and routine back in my life.

For this Sunday, on that 40th running of Dublin, the numbers have tripled in size since that October day in 2000 when I stepped out into the rain and lined up for my first ever marathon, no idea what to expect. It felt easy for a long time, up to about two hours, then I was in unknown territory, beyond what I had ever run before so the mental tactics were required.

No doubt there will be many first-timers this Sunday, and it’s always a privilege to be able to line up and run a marathon, even more so when taking control of your capabilities and running at your own pace while enjoying the company of those around you.

The marathon can be very predictable, if you stick to your capabilities, then you will be guaranteed to enjoy the run. There may be a few surprises, and certainly plenty of reality checks along the way, which is also why it’s important not to get too excited and start off too fast.

Then after the ecstasy of the finish and all the joyous and regular routines of the training, what next?