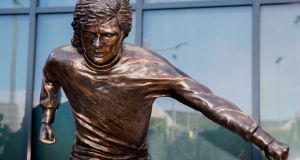 From Cristiano Ronaldo to Diego Maradona, a dubious likeness in bronze has become almost de rigueur for any self-respecting football superstar.

Now the late, great George Best has been added to the list, after fans heaped criticism on a life-size bronze statue of the Manchester United legend that was unveiled in his native Belfast this week.

Critics claimed the statue, erected near Windsor Park where Best produced magic on the field for Northern Ireland in the 1960s and early 70s, looked nothing like the midfielder. One claimed it looked more like Lionel Ritchie than the man once christened “the fifth Beatle” in his heyday.

The statue was revealed to the public on Wednesday to mark what would have been Best’s 73rd birthday.

But the figure has split his fanbase, especially those in Belfast. Some compared it to the “White Walkers” from Game of Thrones, while others said it resembled fellow Manchester United star Paul Scholes “with a 70s haircut”.

Another critic said it resembled the legendary Spurs, Arsenal and Northern Ireland goalkeeper Pat Jennings, who helped unveil it.

Northern Ireland fan Davy Boyd said the statue was “worse-looking than the Ronaldo one”, referring to the statue that was eventually replaced at Madeira airport following a barrage of criticism.

“Anybody that’s important – his family and his fans – they’ve all agreed that it’s his likeness and that’s enough for me,” he said.

However, Gerry Armstrong, the ex-Spurs player whose winning goal against Spain in the 1982 World Cup propelled him into to the pantheon of Irish football heroes, defended the statue.

The team-mate and friend of Best, who joined Best’s family for the unveiling, said he didn’t accept the criticism. “No! The body is great and it’s always difficult to get the features exactly right, which is nearly impossible in a bronze statue. I personally think it’s very good and it’s an action shot of George which he would have loved,” Armstrong told the Guardian.

Sculpting a statue of a football legend can be a precarious business, as the creator of a figure representing Maradona found out in India two years ago.

The bronze figure holding up a replica of the World Cup Maradona won for Argentina in 1986 sparked a bombardment of online abuse. Social media commenters said it looked more like the Britain’s Got Talent singing star Susan Boyle than the midfielder behind the “hand of God” goal against England.

In November last year, a statue of Liverpool and Egypt star Mohamed Salah was unveiled in Sharm el-Sheikh to some incredulity.