PSG president under investigation in France for alleged corruption 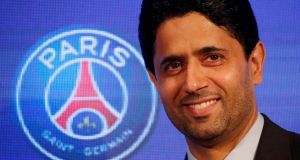 Two other sources said Khelaifi and a close associate were questioned by investigators in March in relation to the bidding process for the 2017 athletics event.

Qatar was unsuccessful in its bid to host the championships, which went to London. But Qatar did go on to secure the rights to hold the 2019 world championships to be held in October.

The move by an investigative judge is a demonstration of the broadening scope of France’s probe into a suspected web of corruption once rife in world athletics, including bribes to cover up athletes’ positive drugs tests.

Officials with Paris Saint-Germain did not immediately respond to a request for comment. Reuters was not immediately able to reach Khelaifi’s representatives in Qatar. But Francis Szpiner, a lawyer for Khelaifi, told Le Parisien newspaper:

“The name Nasser al-Khelaifi doesn’t appear on any document in the case. These accusations are not based on any tangible proof.”

Khelaifi, 45, is deeply involved with sports and sporting events in Qatar. He serves as chairman of Oryx Qatar Sports Investments and the Qatar Tennis Federation, alongside his role as president of Paris Saint-Germain. He is also a minister without portfolio in the Qatari government.

The judge’s decision means Khelaifi is now formally treated as a suspect and takes the legal process one step closer to trial. Under French law, however, a suspect is not formally charged with a crime unless he is sent to trial.

French prosecutors this week recommended that Lamine Diack, the Senegalese former head of the IAAF, and his son stand trial for a host of suspected illicit practices, committed over a number of years with the active involvement of athletes and their federations.

French prosecutors began their investigation into Diack in 2015, shortly after the IAAF’s ethics commission and the World Anti-Doping Authority uncovered evidence that a Russian athlete paid a six-figure sum to cover up a positive test.

In the four years since, the French probe has widened to include the bidding process for the Rio de Janeiro and Tokyo Olympic Games, as well as the world athletics championships.

The investigative judges presiding over the Diack case accuse the Senegalese of favouring Qatar’s bid for the 2017 world championship in return for a kick-back, sources have said.

The indictment handed to judges on Monday and seen by Reuters accuses Diack and his son, Papa Massata Diack, of bribe-taking and money laundering.

A source familiar with the matter said Oryx Qatar Sports Investments had undertaken to pay $32.5 million for the commercial rights to the 2017 championships of which a fraction was paid upfront as a non-refundable deposit. The full amount was conditional on Qatar winning the bid, the source said.

Oryx QSI is owned by Khelaifi and his bother, Khalid, and is a subsidiary of the Qatar Investment Authority, a state holding.

Nasser Khelaifi is also chairman of beIN Media Group, a television network that holds regional rights to many of the world’s top sporting events, including World Cup soccer.

He is currently under investigation in a separate case by Swiss prosecutors for providing “undue advantages” to soccer’s global governing body Fifa for broadcasting rights for the 2026 and 2030 World cup.

The IAAF on Wednesday told Reuters it had in 2016 introduced “wide ranging reforms right across the sport, including its decision making and approval processes, overall governance at every level of the sport”.