Wenger favours idea of former player succeeding him at Arsenal 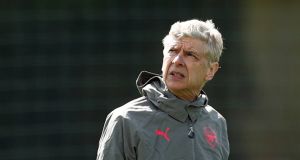 Arsene Wenger: “I am convinced in the future, with two or three additions, this team has the quality to fight for the title.” s via Reuters/Andrew Couldridge

Arsène Wenger believes it would be “even better” for Arsenal if they were to appoint a former player at the club to succeed him as manager at the end of the season. He also provided the clearest indication yet that he did not want to step down by revealing the timing of the decision was not down to him.

Wenger was in relaxed mood before tonight’s Europa League semi-final first leg at home against Atlético Madrid – a tie that he feels he has to win in order to avoid an anti-climatic conclusion to his near 22-year tenure.

It promises to be an intriguing contest in which Wenger is set to start with David Ospina in goal; a surprising move, given the manager played Petr Cech in both legs of the quarter-final against CSKA Moscow.

But, perhaps inevitably, the focus remained on the fallout from the announcement last Friday that Wenger was set to leave his post and the discussion as to the identity of his successor.

The favourite to take over is Luis Enrique, the former Barcelona manager whose credentials are being pushed by Raul Sanllehi, Arsenal’s new head of football relations. Sanllehi worked with Enrique at Barcelona and Wenger said he had a “high opinion” of him. But the merits of the former Arsenal captains Patrick Vieira and Mikel Arteta have also been advanced.

Vieira, the manager of New York City, said yesterday that he was flattered to have been linked.

“It’s not something which will stop me doing what I am doing at the moment,” he said. “I don’t want this to be perceived that I want to go because I don’t want to leave. But if the question is as simple as ‘Are you ready to manage any teams in Europe?’, I would say: ‘I am ready.’”

Wenger has said he will play no part in the recruitment of the new manager but when asked about Vieira and Arteta – the latter is a coach at Manchester City – it was interesting to hear the 68-year-old endorse the notion of a former player, even if they might be less heralded in managerial terms.

Arsenal, famously, made the bold move to appoint him in 1996, when ‘Arsène Who?’ was the question on many people’s lips.

“The need is to make the right decision, even if you have to be bold,” Wenger said. “Is it former people that worked here? That is even better. But there are many players who had qualities. Some of them are in the job. I don’t influence that choice but I will stand behind the decision.”

When Wenger and the club made the announcement that they would go their separate ways, the understanding was that he had jumped before he was pushed. The club’s hierarchy had become increasingly worried about the team’s poor Premier League performance and the chief executive, Ivan Gazidis, offered a telling line last Friday evening. “There’s been a conversation, Arsène has made his decision and now that process [regarding a successor] begins,” Gazidis said.

Wenger was asked yesterday why he was quitting when he had another year to run on his contract.

“The timing was not really my decision,” he replied. “For the rest, I have spoken about it already.”

Wenger made it plain he intended to seek another job in management – “I will continue to work, that’s for sure” – but he suggested he might need a period of reflection.

“I had no break for 35 years. In our job – you can look around – that doesn’t exist. I don’t know now how addicted I am. I am a bit like a guy who plays Russian Roulette every week and suddenly has no gun any more. I will see how much I miss that gun.”

There were moments of levity, including one when Wenger predicted the club would have no shortage of managerial applicants.

“That shows you that the place is a good place. Green outside, nice trees, good grass. Fantastic. No pollution. Until the press conference starts.”

The broader point that Wenger sought to make was his successor would have a wonderful chance to be successful because he had helped to create such a powerful squad and club. But the hurt of the looming separation is clear. Wenger continues to feel the urge to justify himself and his record.

“I am convinced in the future, with two or three additions, this team has the quality to fight for the title,” he said.

Wenger listed his greatest regret as the 2006 Champions League final defeat against Barcelona, which had come after a couple of highlights – the knock-out phase wins over Real Madrid and Juventus.

“If you look at Arsenal and the number of games they play in Europe in their whole history, it is not Real Madrid. The history of the club has become very demanding but the longer history is not so bright that you can say the club has won 10 European Cups.”

1 Ireland’s work-ons: Four things Andy Farrell needs to address
2 David Humphreys: Georgia simply can't be dropped in at the deep end
3 Sordid murder of hurling brothers still resonates in south Galway
4 It’s good to have Richie Hogan back, he was missed
5 Ireland’s clash against Georgia will be an important audition
Real news has value SUBSCRIBE
Crossword Get access to over 6,000 interactive crosswords