10,000 fans turned out at the airport to welcome team home after they beat Juventus 1-0 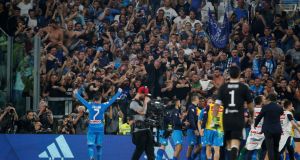 Napoli’s Jose Callejon celebrates after the match with Napoli fans following their win over Juventus at the Allianz Stadium. Photo: Stefano Rellandini/Reuters

Tell a story in two words. Diego Maradona did his best in the moments that followed Napoli’s stunning 1-0 victory over Juventus in Turin on Sunday night, logging in to Facebook and hammering in a phrase screamed everywhere from a Mediaset Premium commentary box to the bars and piazze of Naples (in the latter case: with a few extra expletives laced in). “Mamma miaaaa!!!”

Not since Maradona himself wore the shirt have Napoli known times like these. By the time the Partenopei touched down back at Capodichino airport, the crowd awaiting them was reported to have swelled to as many as 10,000 people.

Their flight had been delayed by 90 minutes to allow local authorities to get a grip on the situation from a security standpoint. Napoli landed at 1.30am, but it was past 4am before their team bus started to pull clear of the throng. Even then, an informal convoy of mopeds and cars trailing scarves and flags accompanied them on the drive back toward their Castel Volturno training ground.

Similar scenes had played out in reverse a day earlier, thousands gathering outside Napoli’s Stadio San Paolo to lend the team a proper send-off before it travelled north. All this for a game that could not change their position in the league standings. Win or lose, Napoli would end the day in second place.

And yet, when Kalidou Koulibaly rose to break the deadlock with a 90-minute header, everything really did seem to change. Four days earlier, Napoli had been losing at home to Udinese while Juventus led away at Crotone. If those results had held, the gap at the top would have widened to nine points. Instead, by the end of Sunday, it was down to just one.

Juventus still lead the way, still have control of their own destiny. But their remaining four games include away trips to face Inter and Roma: both fighting tooth and nail for a Champions League berth. Napoli’s schedule is not exactly soft, with visits to Fiorentina and Sampdoria still to come, as well as home fixtures against Torino and Crotone. If offered the chance, though, would they really trade places?

It is not simply a question of the fixture list, either. The impact of this win went beyond what you could read in the standings. A month earlier, following a win over Genoa, manager Maurizio Sarri responded to a question about whether his team could win the title by saying that “if it was up to me we would go to the palace and seize power.”

The Allianz Stadium has not so much been a palace as a fortress for Juventus, a place where they previously lost just seven games in as many years. The Bianconeri had faced Napoli six times here in the league, winning on every occasion. To break such a run could hardly fail to leave a psychological impact.

Reminded of his words on Sunday, Sarri initially tried to turn them back on journalists, saying “that supposes Juventus are the power. That’s you saying that.” But he extended the thought by agreeing. “They are a team who have won the Scudetto for six years in a row, they represent the technical power, and in my opinion some other power too, so they are the team everybody wants to beat.”

Napoli never gave Juventus a moment to settle. Lorenzo Insigne could have put them in front in the very first minute, darting between two defenders to reach a deflected cross but getting his shot all wrong under pressure for Giorgio Chiellini. The defender hyper-extended his knee in the challenge and limped out of the game 10 minutes later. His departure was a blow for the hosts, but it can hardly explain their failure to register a shot on target for the first time ever in this venue.

It is one thing to play cautiously in a big game, to protect yourself and look for the killer break, as Juventus have done very effectively at times under Massimilano Allegri. Here, they simply looked timid. As Gianni Mura would reflect in Monday’s edition of La Repubblica, “If [Giovanni]Trapattoni had played like this they would have whistled him all the way to the French border”.

Napoli were imperfect, even ragged at times, yet they fought to sustain an active high press, routinely sending as many as three players to smother the opponent in possession. You got the impression that they were enjoying their status as underdogs, after appearing in some recent games to be weighed down by the expectation that they must always win against lesser opponents.

The goal hardly felt inevitable – if anything, we are more accustomed to seeing Juventus find a way to steal a decisive moment in games such as this – yet it was a just reward for the only team that truly tried to win. There was something poetic about the fact that it should be scored by Koulibaly, a towering giant in a team most famous for its trio of “marvellous smurfs” up front.

“Juventus are still in front and so almost nothing changes,” insisted Sarri afterwards. “We just need to think about the match in Florence, Juventus are in front and our chances are very slim.”

He was not fooling anyone. The fireworks continued long into the night in Naples, fans flooding the streets and squares far away from the airport, too, while delirious pizzaioli served up free dinners.

Before kick-off, Sarri had been honoured with a mural by the street artist Jorit Agoch, famed for previous works featuring – among other, non-footballing figures – Maradona and Marek Hamsik. The manager has still not won a major piece of silverware in Naples, yet he has built a team that deserves to be remembered for its resilience as much as its flair. This was Napoli’s 30th consecutive away game in Serie A without defeat.

The night had started on a rather less edifying note, Sarri caught showing a middle finger to Juventus fans as Napoli’s team bus arrived at the stadium. Rather than apologise afterwards, he clarified that his gesture was not aimed at the club’s fans in general, but merely those who “were spitting at us and insulting us because we are Neapolitan”.

His unrefined manner is not always appreciated outside of Naples but then, wasn’t the same true of Maradona? If he and his players can see this dream through to its conclusion, they will earn a place every bit as indelible in club lore. – Guardian service