Arsene Wenger: ‘I think it will be surreal for me when I don’t work’ 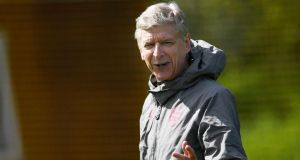 Arsene Wenger says he was not behind the decision to make an early announcement on his departure as Arsenal manager. Photo: Neil Hall/EPA

Arsene Wenger has revealed the timing of the decision to announce his departure from Arsenal at the end of the season was not his call.

The club announced last Friday that Wenger will step down in the summer after over 21 years at the helm — with the Frenchman also confirming he intends to continue working following his exit.

The timing of the announcement came as a surprise with the Gunners still fighting to finish as high up in the Premier League as they can and with a Europa League semi-final against Atletico Madrid on the horizon.

The first leg against the LaLiga side takes place at the Emirates Stadium on Thursday night, the second time in four days Wenger has taken charge of a home match following the revelation he will leave.

“The timing was not really my decision,” Wenger said when quizzed as to why the announcement came at this point of the season.

“I do my job, keep my routine and focus on what I have to do every day. I prepare well for the game. I think it will be surreal for me when I don’t work. At the moment I work like ever.

“You’re never sure you do the right thing, but life is interesting because you have to deal with different kinds of situations. Until now, I had a life that was full of different experiences.

“Some were very difficult to deal with, but I always did it. That’s another one certainly I will face one day.”

Former vice-chairman David Dein was the man behind Wenger’s shock appointment as Arsenal manager in 1996 and said over the weekend he had already received calls from potential suitors ready to offer the 68-year-old a new challenge.

Wenger said after Sunday’s 4-1 win over West Ham that he is “too attached” to Arsenal to think about going anywhere else — but changed that stance when questioned about it on Wednesday.

“Will I take a little rest? I will continue to work, that’s for sure. My pride has always been to give my best to where I’m employed until the last day of my contract. At the moment I’m just focused on that.”

Wenger questioned whether a “perfect goodbye” exists in football but went on to say he wants to deliver Europa League success more for his players than for his own personal glory.

“At the moment I do not look after myself, I just want to do well,” he added.

“I just want to do as well as I can because this team has quality, these guys - I’ve seen them this season be challenged mentally.

“I’ve always seen them respond in a positive way and I think this group of players deserves something special.

“I want to do it for them, to achieve something with them because I feel they have a special mental quality.

“My biggest satisfaction would be to be successful together with the group of players that I have. I’ve seen them behave the whole season and they deserve it.”

Wenger will go into his final European home game as Arsenal boss with the boost of having Mesut Ozil, Jack Wilshere and Petr Cech available.

The trio missed the weekend win over the Hammers with minor problems but all trained on Wednesday.

Wenger is also hopeful that Henrikh Mkhitaryan could recover from a knee injury to feature in the second leg in Madrid next week, but there was worse news over the fitness of Mohamed Elneny, who suffered ankle ligament damage in the West Ham game.

“Mohamed Elneny is out for the rest of the season,” he said.

“He has a little chance to play at Huddersfield. I think he will be available for Egypt at the World Cup, but not any more for Arsenal.”