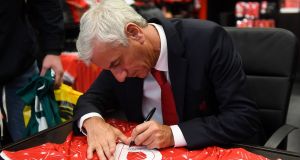 Ian Rush at the Liverpool FC Store in the Ilac Centre, in Dublin on Monday. Photograph: Harry Murphy/Sportsfile

There’s more than a touch of Liverpool 1984 about the current side and their European campaign, reckons former striker Ian Rush.

The now 56-year-old believes PFA Player of the Year Mohamed Salah can again be a key figure against Roma who are in Anfield tonight for the first leg of their Champions League semi-final.

Having scored five times in the earlier rounds, Rush got one of the penalties that decided the 1984 European Cup final against the Italian club in the Stadio Olimpico. He finished the campaign with 47 goals in all competitions – a record Salah, currently on 41, is threatening to beat – the same PFA award plus the biggest prizes of all: League and European Cup winner’s medals.

Salah, he says, can have his record if it helps Liverpool become champions of Europe once again.

“If they do get to the final and he breaks it in the final, I’ll be happy,” says the former Welsh international who was in Dublin yesterday to promote the club’s friendly against Napoli at the Aviva Stadium on August 4th. “I’ll settle for that all day long. Once it doesn’t go to penalties.

“We had a tremendous team spirit in ‘84 and I can see similarities to this Liverpool team now. They work really hard for each other, they are playing with a great team spirit, and that comes from the manager. Joe Fagan made us go out feeling confident and I’m sure Jurgen Klopp is doing the same with these.

“The memory for me [from that night in Rome] was in the tunnel singing that Chris Rea song, I Don’t Know What It Is But I Love It. We did it throughout the European Cup. We were so confident.

“When it went to penalties, probably the most nerve-wracking time for me was walking from the halfway line to the penalty spot because you are by yourself. You haven’t got your team-mates to rely on and you have 60,000 people booing you. When you score I would say it was the most relieved I’ve ever been. It was absolutely amazing.”

Rush’s efforts that season earned him just about every individual honour going and he believes the PFA prize handed to Salah on Sunday is only a stepping stone on the road to even greater things for the Egyptian.

“I think Salah has been the best player in the English Premier League this season,” he says, dismissing Pep Guardiola’s suggestion that Kevin De Bruyne was more deserving of the award. “For me you can’t compare the two. Salah has had an amazing season for Liverpool. We beat Manchester City twice and hopefully next season we can compete with them for the league.

“You talk about Ronaldo and Messi but people are saying Ronaldo, Messi and Salah now. That’s how good a season Mo Salah has had. And he can get even better.”

Usurping Rush’s record and emulating his European Cup win would, he suggests, be a big another big step forward. If Salah’s goals are almost being taken for granted, though, Liverpool, the former Juventus striker believes, will have to be at their best defensively to prevent Roma getting the away goal that ultimately proved decisive for them against Shakhtar Donetsk and Barcelona.

“We need to stop Roma from scoring in Anfield,” he says. “If we can do that I believe we have a genuine chance of getting to the final.

“Barcelona went to Roma and didn’t score. That takes some doing. But if we can stop Roma scoring tomorrow, we’ll go to Rome and I’d be confident that we’d score with the front three we’ve got.”

3 Fifa warns players not to engage in European Super League