Club's strict financial model worked well for the manager and board, if not for supporters

Arsenal manager Arsene Wenger refused to blame the fans for his early departure in a press conference after Sunday's win over West Ham, yet claimed he had felt 'hurt' by the lack of unity shown by Arsenal fans over the last few seasons. 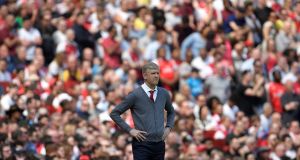 Arsène Wenger: Match-going Arsenal fans, paying the top prices of any club in the world, have increasingly felt ripped off in recent years. Photograph: Toby Melville/Reuters

“To thine own self be true” is a cliché that has become a kind of universally-accepted truth, even though the character in Hamlet who actually says it is Polonius, a bore who is not taken seriously by anybody.

Arsène Wenger will leave Arsenal knowing that he has always been true to himself, but Arsenal might have been better off if Wenger’s commitment to his own ideas had been a little less total, and a little more receptive to influence from the rest of the world.

It’s ironic that Wenger should have ended up an insular and outdated figure, because he was the one who opened up the closed world of English football to the outside influence that has come to define it.

He was the first foreign manager to win the title, and the first to win it with a team based on foreign talent. He was the greatest advocate for broccoli that vegetable has ever had. But once all his competitors realised that foreign players were good and drinking was bad, he started to lose his edge. And, unlike his great rival Alex Ferguson, he showed little interest in figuring out another way to win.

In 2003, the arrival of Roman Abramovich at Chelsea broke up the duopoly Wenger and Ferguson had established in the Premier League. The two managers reacted to the challenge in different ways.

Ferguson decided that his team needed to update their style of play, so he gave his assistant Carlos Queiroz wide-ranging authority to school his players in the arts of defensive possession football. In 2008, United won Ferguson’s second Champions League, with a completely different style from the one that had won his first nine years earlier. Ferguson was never so much in love with any particular vision of the game that he wouldn’t abandon it for something he thought would work better.

Wenger, by contrast, saw no reason to deviate from the football principles that had always served him well. And he never would and never has allowed any other individual the sort of influence over his team that Ferguson granted Queiroz. So as new trends swept through European football – the muscular counter-attacking of Mourinho and Benitez, the position game of Guardiola’s Barcelona, the frenetic pressing style of Jurgen Klopp and Ralf Rangnick – Wenger’s Arsenal just kept playing the same way they always had.

Ever since the original cadre of George Graham-coached defenders retired, Arsenal have been a sort of cargo-cult Barcelona, imitating the technical passing football of the Catalans without the pressing and organisation that holds everything together. Every opponent worked Arsenal out years ago, and everyone now expects them to lose their biggest games in much the same way every year.

Ferguson and Wenger also took different approaches to team-building. Ferguson knew that he could not outspend Chelsea, but he was still prepared to take major risks in the transfer market, such as his decision in 2004 to spend £26 million on the 18-year-old Wayne Rooney, then a world record fee for a teenager.

Wenger was more cautious, investing smaller amounts on lesser-known players in the hope that one of them would turn out to be the next Nicolas Anelka or Thierry Henry. Remarkably, he would not spend a Rooney-sized fee on any player until Mesut Özil arrived in 2013.

There is a widespread notion that the cost of building the Emirates Stadium was a great millstone around the neck of Arsenal’s ambition, but this is not true. The Emirates was generating extra money for Arsenal from the moment it opened. Analysis by the football finance blogger Swiss Ramble shows that between 2007 and 2016, Arsenal increased their cash balance by £191 million, amassing a staggering cash mountain of £226 million.

Arsenal could have invested this money in the team instead of hoarding it in the bank. The reason they didn’t is that Wenger didn’t want to, for reasons of his own.

The first had to do with aesthetics. For Wenger, buying success a la Chelsea or Manchester City was “financial doping” – a contemptible and illegitimate path to success. He wanted to prove he could win the league a better, purer way – by finding little-known young players and growing them together into a team.

As the years passed – and a succession of young players grew up, became disillusioned, and left – it became clear that for Wenger, it was more important to do it his way than it was to do it at all.

His warped priorities were never more evident than in the autumn of 2009, when he announced: “I have been criticised for not signing Xabi Alonso or Gareth Barry. But if I signed them, I would have killed Alex Song, Abou Diaby and Denilson.”

What kind of manager is more concerned with protecting the confidence of mediocre players than with signing outstanding players who could immediately improve his team?

Another reason was more practical. Wenger understood that every corporate board appreciates a manager who makes money for the company every year.

He may not have been winning any trophies, but he resisted the temptation to blow the club’s money in the transfer market and kept the revenue flowing with Champions League football every year. The board rewarded him with one of the highest salaries in the UK. Wenger’s reported 2017 salary of £8 million would comfortably place him among the top 10 best-paid CEOs in the FTSE 100.

By 2012 he had begun to refer to Champions League qualification as “the first trophy”, which lent further weight to the suspicion that he believed Arsenal’s cash mountain was as important a part of his legacy as the titles he won in his early years at the club.

While this model of success worked well for the board and for Wenger, it wasn’t so satisfying for the supporters whose job it was to pay for it. In January, Uefa’s annual benchmarking report revealed that Arsenal are the most expensive club in the world to support. The club “extracts” on average £74.09 of revenue per fan per game.

Over the weekend many of the tributes to Wenger expressed sadness that a man so charming and dignified has been forced to endure such vile abuse from so-called supporters whose disrespect is exceeded only by their ingratitude.

But people are seldom at their most agreeable when they feel they’re getting ripped off, and that’s how most match-going Arsenal fans have felt for years. Now at last, after a lost decade, they can be hopeful about what is coming next.