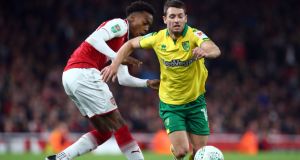 Wes Hoolahan has said that he is looking forward his “next challenge” after it was announced that he will be leaving Norwich City at the end of this season.

The 35-year-old, who has scored 53 times in 351 appearances for the club will bow out this weekend, in the home game against Leeds, and take no part in the following week’s trip to Sheffield Wednesday so as to ensure that his last competitive game for City is at Carrow Road.

The midfielder, who is a huge favourite among the club’s supporters, joined from Blackpool in the summer of 2008 and his service during the years since, under seven different permanent managers, is to be recognised with a testimonial game.

In the meantime Hoolahan, who retired from international football a few months ago, said that he would be moving on with some sadness.

“It’s been a great 10 years at this club,” he told its website. “The fans have been amazing to me, the club have been great and I’m going to miss the place.

“I’ve thoroughly enjoyed myself at Norwich City and it’s going to be an emotional day on Saturday against Leeds. I just want to say to the fans thanks for the support, you’ve been amazing throughout my whole time here.

“I’m looking forward to my next challenge, and to organising a testimonial for next year. I’ve had a brilliant time.”

The club’s Sporting Director, Stuart Webber said that: “It was a really difficult decision. What he’s done for the Club, both on and off the pitch, is immense. It’s always difficult especially when it’s an end of an era for somebody and I’m just glad he’s going to get the send-off he deserves.

Large numbers of the club’s supporters seemed to endorse that position with many taking to social media to express their sadness at the news and pay tribute to the Irishman whose creative brand of football and knack for the spectacular made him hugely popular.