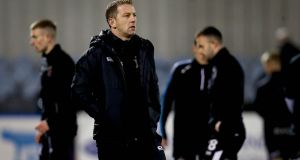 Uefa has announced the postponement of its Executive Committee meeting scheduled for May 27th until June 17th. The move is, among other issues, likely to mean a further period of uncertainty regarding its plans for the early qualifying rounds of next season’s European club competitions.

The federation said that the postponement of the meeting has been prompted by issues relating to a couple of the host cities for Euro2020. Dublin does not appear to be one of the venues causing concern with the Irish Government and other stakeholders having confirmed to Uefa a couple of weeks ago their willingness to proceed in 2021 as previously planned.

Uefa had asked member associations to inform it before the meeting of their plans for either finishing leagues or coming up with an alternative method, based on sporting merit, of nominating teams to participate in the 2020/21 Champions and Europa Leagues. Much of the resulting detail was expected to be confirmed immediately after it.

The FAI, which also has major concerns regarding international games in the autumn, has been negotiating with clubs here on proposals to resume the two divisions of the Airtricity League and had cited the meeting as a target date for resolving the situation.

On Friday, the association confirmed plans for a four team tournament intended to help Bohemians, Derry City, Dundalk and Shamrock Rovers prepare for European games on the basis that they would have no league games to play before the opening ties, which were originally scheduled for late July.

The delay will throw the timing of that mini tournament into further doubt and prolong the uncertainly over the European qualifying rounds amid fears that they might be truncated or even abandoned completely. There has also been the concern expressed with regard to whether the money the four Irish clubs due to participate in European competition and solidarity payments from Uefa to other clubs might be affected in the event that this year’s club competitions are not concluded. Around €2.5 million was received by clubs here in prize money and other payments last year.

Uefa president Aleksander Ceferin expressed confidence at the weekend, however, that both the Champions and Europa Leagues will be concluded before the end of August and interim FAI CEO Gary Owens told The Irish Times last week that he believes the qualifying rounds and related funding will go ahead in the event that that happens.