Have boots, will travel: The Cillian Sheridan roadshow rolls into Poland a second time

‘More players should travel but it can be very hard. It can be a bit of a wild west sometimes’ 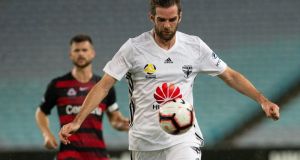 Cillian Sheridan in action for Wellington Phoenix during his time in New Zealand.

When Cillian Sheridan was travelling up to training in Dublin on Bus Éireann, he probably couldn’t have imagined he would end up on a journey that has taken him to Scotland, England, Bulgaria, Cyprus, Poland, Israel, New Zealand and now back to Poland.

In the history of Irish professional soccer players, he is one of the few willing to go off the beaten track. “I never really had homesickness that other players tend to get. I’m quite laid back so I don’t get too high or too low.”

Sheridan, a son of teachers from Bailieborough in Co Cavan, also likes to put himself out there on social media with his humorous tweets and left-field podcasts. In his latest YouTube production, The Sheriff on Toast, he shoots the breeze over breakfast with some of his mates.

Sheridan has a good story to tell. How he has rubbed shoulders with Messi, Ronaldo, David Luiz and Gerard Piqué. How he was happy to learn from his mistakes. How sports psychology helped him. Now 31, the 6ft 5in forward with a sweet left foot has carved out a career on the back of a simple motto: “Have boots, will travel.”

He said if I wanted to push on and try and make an Ireland squad you need to be up playing in Dublin. Belvedere took me just off his recommendation really

As a boy, Sheridan was a Gaelic footballer who played for the Cavan minors. He was spotted by the late Seán McCaffrey, the former Ireland U17 and U19 manager who was then a regional FAI coach, at a summer soccer camp in Blackrock, Co Louth.

That meeting proved crucial as the Monaghan man put him on the pathway to the professional ranks. “Seán told me, you should go for these Ireland trials at under-15s. I didn’t get them but then he said if I wanted to push on and try and make an Ireland squad you need to be up playing in Dublin. Belvedere took me just off his recommendation really.”

His mother or father would drive him up to Belvedere, where his coaches included Fran Pierce, Ray McCann and ex-St Pats captain Damien Byrne. As he got older, he would sometimes get the “Bus Éireann to Dublin that went right by the house”.

There was never a drive from him to make it in football. He was simply taking the much-loved McCaffrey’s advice about the path he needed to take. “It was like, this is what you need to do, so do it.”

Trials followed at Norwich, Blackburn, Sunderland and Celtic. He wasn’t fazed. “The novelty of it probably masked any nerves.” In the end, Sheridan went to Celtic. It was an easy choice. “They were the only ones to offer me something,” he says, speaking on Skype from Plock in central Poland.

He signed for Celtic around Easter 2006 just before doing his Leaving Cert. The late Tommy Burns was a big help. “He was always that bridge between the youths and the first team for guys coming in.”

Sheridan soon got a call from Gordon Strachan. He made his debut in a Scottish Cup quarter-final in February 2007, coming on as a sub away to Inverness and setting up a last-minute winning goal for Kenny Miller. The late call-up meant he had to miss a trip home to celebrate his 18th birthday.

A hip injury ruined the following season but come September 2008 he was making his Champions League debut at Old Trafford. The match was over with Manchester United 3-0 up when Sheridan entered the fray with about 10 minutes to go.

For the return fixture against United in November, he was in Celtic’s starting 11. A BBC report from the time says Strachan picked Sheridan in an attempt to unsettle the United centre half pairing of Rio Ferdinand and Nemanja Vidic. He smiles at the notion.

“I had a chance from a corner, where I nearly scored. The thing you remember most vividly is standing in the line-up for the music. That’s when you think back to being at home, watching it on television.” It wasn’t plain sailing after that and it would be six more years before he returned to the Champions League.

After a decent season on loan at St Johnstone, he found himself in Giovanni Trapattoni’s Ireland squad in May 2010. “He liked me and then I got my two caps at the RDS [against Paraguay and Algeria].” He remembers the Italian as a very tactical and meticulous coach. “He could spend 45 minutes on throw-ins.”

That August, having played an Ireland under-21 match the previous night, he was named to start against Argentina. It was the first game at the Aviva Stadium and the visitors included Messi, Di Maria and Mascherano.

While enjoying the occasion and earning his third cap, he feels he didn’t do himself justice. He is still annoyed by a bad touch he took. “I remember it like it was yesterday. But I’ll put that down to the fatigue”, he jokes.

After becoming tired of loan moves from Celtic, CSKA Sofia offered him a good three-year contract which overpowered any doubts he had about heading into the unknown in Bulgaria. He figured that if it didn’t work out he’d still only be 24 when his contract expired.

The club had money problems. The culture was very different, both on and off the field. He didn’t get paid for the first three months. It all began going wrong and, Sheridan admits, his attitude could have been better. But looking back now, he says: “It ended up being good because it made going to other countries much easier.”

Spells at St Johnstone and Kilmarnock followed. Then in the summer of 2013, he was off to Cyprus and Apoel Nicosia, managed by Paulo Sérgio, who had spent a year at Hearts. Sheridan says he had always done well against the Edinburgh club.

He struggled for the first four or five months and it didn’t help when Sérgio was sacked. But he was able to draw on his Bulgarian experience and turn the negatives into positives. He also started working with Niall Stack, a sports psychologist and garda who was then based in Cyprus with the UN.

He learned how to cope with not being in the team and be prepared to seize his chance when it came. “Whereas before maybe I might just have thrown in the towel and gone back to Scotland. That kept me at a level where every time I was coming back in, I was performing well.”

By the end of the season he was part of a double-winning team and a hero to the fans after chipping in with several important goals. Apoel made the Champions League group stages in a pool featuring Barcelona, PSG and Ajax. They only lost 1-0 at the Nou Camp, the goal headed in by Gerard Piqué from a Messi free-kick.

At the end of his second double-winning season at Apoel, he didn’t have to look far for a new home and Sheridan enjoyed a successful 18-month stint at Omonia Nicosia which included the goal which eliminated Jagiellonia Bialystok, his future Polish employers, from the Europa League.

When Jagiellonia made an offer in February 2017, he was happy to try his luck in Poland, near the Belarusian border. After adjusting to the higher intensity, he revelled in the atmosphere of bigger crowds and better stadiums. “I took what I was doing in Cyprus and went and did it in a stronger league.”

More players should travel but it can be very hard. It can be a bit of a wild west sometimes

Jagiellonia finished second in Poland’s top tier in both seasons that Sheridan was there but he suffered some annoying injuries and ended up being in and out of the team. During the winter break at the end of 2018, he joined Wellington Phoenix of the A League, but with the two strikers ahead of him in top form, he spent most of his time on the bench. The second half of 2019 saw Sheridan pitching up in northern Israel, near the Golan Heights, with Hapoel Ironi Kiryat Shmona.

But with the offer of relative security in the form of an 18-month contract, he returned to Poland, joining Wisla Plock. He only signed on February 1st. He had started the last couple of games before football was suspended due to coronavirus but is happy to be in Plock and just wants Wisla to finish the season on a high when the league resumes on May 29th, all going well.

He mostly recommends the life of the wanderer. “More players should travel but it can be very hard. It can be a bit of a wild west sometimes.”

Though Sheridan does admit to some regrets. He would have loved to have done better at Celtic and in Bulgaria. “But you are where you deserve to be.”

As for The Sheriff on Toast, he tweeted an invite to Ricky Gervais to be a guest. Maybe he should ask fellow Cavan man Michael Harding to join him one morning. That would be some double act.