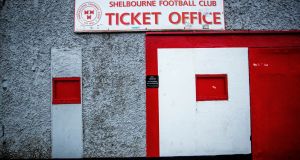 Tolka Park, home of Shelbourne FC, closed during the suspension of the League of Ireland. Photo: Ryan Byrne/Inpho

Almost three years after setting out to establish an All Island League, Kieran Lucid admits that the latest version of his plan might be described as a complicated compromise, but he remains convinced that the structure approved by a majority of clubs in recent weeks still has the potential to transform the club game across Ireland.

Based on projections put together by Dutch sports consultants Hypercube, Lucid claims that the adoption of a split season league – that would start out with clubs playing in their respective competitions north and south before progressing to a crossborder phase – has the potential to grow total revenues at the top 20 or clubs almost five fold over the next decade to almost €100 million per annum.

Even that, he acknowledges, is not what he had originally been targeting, but he observes: “It’s a not insignificant jump.”

The projections, which are based on the fourth of six scenarios put to clubs after an island-wide consultation process, assume small but significant ground improvements combined with a competition format that supporters might describe as “innovative”. Traditionalists, he accepts, might characterise it somewhat less favourably.

King of the Island

The basic plan, which has been devised in order to address the concerns raised in relation to the original All Island League proposal, involves clubs playing two rounds of games in their own leagues before a split, based on league placings, after which teams would face sides from all across Ireland in a final round of matches. Points at this stage would count towards two separate tables, one relating to the domestic league, which would continue to decide the allocation of European club competition spots, and another which would be a stepping stone towards and end of season knockout competition, provisionally titled the “King of the Island”.

“The game needs something radical,” says the Dublin-based tech millionaire. “And option four is radical. Okay, it’s complicated but many leagues in Europe are complicated; a lot of other existing competitions are complicated.

“If you look at the Champions League, there’s a backdoor into the Europa League but fans get all that stuff pretty quickly. Being complicated shouldn’t be a criticism in and of itself. It should just prompt the question: can this make the game better?”

He cites the example of the Belgian league which was restructured, amid a good deal of controversy, in 2009 so as to include a mid-season spilt and more playoffs. In the decade since, it has climbed from 14th to 8th in the European rankings, overtaking the likes of the Dutch Eredivisie along the way.

During the same time, both Irish leagues have slipped down the Uefa compiled ranking list: from 30th to 37th (Airtricity League) and 47th to 52nd (NIFL) at the end of last season and so, he insists, “I think scenario four has the chance to give the game a real boost.”

Hypercube’s modelling suggests that by adopting the plan revenues could be grown from around €21 million at 22 clubs now to €99.5 million at 24 in 10 years’ time with a substantial portion of the additional revenue coming from more regular group stage participation in European competition, primarily the soon to be established Conference League.

“The good news about the Conference League is that for qualifying you get the same money as you did hitherto for the Europa League. You don’t get the same money for each point you get after that but it means that at least one of our teams, hopefully more, should be in the group stages pretty much every year and that means that we are plugged into the European transfer market.

“If you look at some of the Dutch clubs, if it wasn’t for their transfer activity, they’d be losing money. It’s the transfer activity that makes all the difference and their financial stability means they can lock the players in (to longer contracts) and then English clubs and ones from other big leagues respect them enough to pay substantial transfer fees instead of raiding them for free. That’s what it looks like. Facilities, European competition and transfer fees. And bigger crowds would come with that.

“It would be a healthy small European league,” he suggests. “We would be able to keep our best young players here longer and we would have a good run in Europe every now and again.”

Lucid accepts that the plan still has a long way to go if it is to become a reality but the FAI, he says, has been supportive while the IFA has kept the door open after rejecting the original All Island idea. It has been reported that the two associations have established a working party to more fully explore idea.

His hope is that Uefa will ultimately be asked to give their blessing, something he believes they would give.

*The proposed format and other detail is available at allislandleague.com