New abnormal greets us as Bundesliga cranks back up 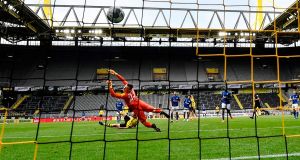 In Leipzig the players bumped elbows and grinned like this was all a little bit silly. In Dortmund Erling Haaland scored the first goal of football’s plague times and stood by the corner flag with his teammates around him in a celebratory pastiche of social distancing, a strangely haunting image that will, you suspect, be recycled many times.

Welcome to the new abnormal normal. Which is, needless to say, a fairly strange place to be. And yet for all the oddity of its staging, something did seem to shift over the 90 minutes of Borussia Dortmund’s 4-0 defeat of Schalke at Signal Iduna Park, one of six comeback fixtures to take place in the Bundesliga, two months since football – and that rather less urgent entity, the world – went into standby mode.

There was encouragement here for the industry. By the end it wasn’t too hard to see how televised football might re-emerge as a functioning entity. No spitting. No hugging. No fans. No noise beyond the constant muffled echo of managerial shrieking, like the sound of somebody being water-boarded in the flat upstairs.

But still, it worked after a fashion. There were early moments of double-take. No doubt the sight of players arriving in protective gear on sparsely occupied buses will become commonplace in time.

There was the deeply weird sight of the masked subs spread in a line in their large leather touchline seats, a row of ejected fighter pilots. Both sets of players grinned and shrugged as they warmed up in front of empty stands. At one point Haaland burst out laughing.

Signal Iduna Park was a poignant venue in this respect, a ground that is as much as any in Europe an emblem of the importance of here and now and being present. This is an unshowy footballing giant, lodged in the leafy flatlands of the Ruhr and circled by low-lying industrial hubs. On match days the walkways are crammed with sausage stalls and beer taps. This is the essence of Dortmund, the place where the club’s heart is located. They had 81,365 in here for the last home game, in February. The contrast in the opening seconds was stark. Why are we actually playing, you kept wondering as the ball was passed around with a forced sense of urgency and Dortmund in particular seemed to be playing through a laudanum haze.

There is, of course, a note of weirdness in the basic idea of football as our first shared step to normality. There’s a famous Dave Chapelle joke about MTV broadcasting the views of the rapper Ja Rule shortly after the Word Trade Centre was taken down. As Chapelle points out: “I want some answers that Ja Rule might not have right now.” Perhaps there are those among us who felt all along that one day Steve McManaman would be the voice to guide our first tentative steps out of a global pandemic. But then football was always likely to jostle its way to the front of this queue, to plonk its tankard down on the bar for first helpings.

And it must be said BT Sport’s pared-back team did a fine job with a deeply odd occasion. James Richardson, ruggedly nautical in greying lockdown beard, looked absolutely delighted to be anchoring the show. His chief pundit Rafael Honigstein’s usual air of ironic distances was only enhanced by the vast expanse of desk between them.

On commentary Paul Dempsey worked hard, and successfully, to bridge the oddity on the pitch, although it was touch and go at first. The ball was passed in silence. There was a foul and nobody howled or screamed. Was this the promised end, the final word on football as metaphor for the emptiness of modern life , the futility of consumer culture? Perhaps not.

Steadily the day began to move, the old muscle memory kicking in. Football began to happen.

Changes will no doubt be made. The games will need something to cover the empty seats and also some kind of soundtrack. Not music, that would be awful. Perhaps just a kind of monotone noise-cancelling drone that blocks out all sense of sound from your brain. Is Mark Lawrenson even available?

Haaland scored with 29 minutes gone, the absence of a crowd offering the bonus of a lovely “ching” noise as the ball hit the pole in the side of the net. And Dortmund ran the rest of the game. The final minutes were a kind of zombie game, played out by some tired athletes on both sides.

No matter, though. The key elements are back. Television schedules will be filled. The rolling advert boards are fired up once more. Evonik’s pitch-side awning is visible to the world, for all the good it’s going to do them. And no doubt the Premier League, fearful of losing market share, will now look to accelerate its own return.

Before then it must be said that Germany has earned this, has earned the right to be first, to stand alone, crowdless, staging football. The Bundesliga isn’t declaring this health crisis to be over. It is instead declaring its own government’s relative competence in the early months of this crisis, the mass testing that means football’s own demands – testing through the whole process for all players and officials – makes it part of the wider culture rather than a special case.

In Britain the approach has been woollier, to the extent the Premier League would be a most unwelcome guest in the middle of this loss of control. For now, though, we can at least see a way back: quieter, a little odd in its rules – no celebrations, plenty of shirt grabbing – but thoroughly welcome all the same. – Guardian