Ken Early: Behind-closed-doors could allow football to make some changes

Why not have matches on weekday afternoons or evenings instead of the weekend? 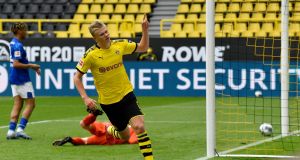 May 16th was meant to be the last day of the Bundesliga season; it ended up being the first day of the restart. Like millions of fans across Europe, I tuned in eagerly for Borussia Dortmund v Schalke. The sunshine reminded you of an international tournament match, the quality of the play was excellent, at least from Dortmund. And after a few minutes I had to acknowledge an uncomfortable feeling: this was the last thing I wanted to be doing.

The thought I kept coming back to was: why Saturday? The reason matches are played on the weekends is because that’s when most fans are free to go to the stadium. Now that nobody is allowed to go - and in most countries are still not allowed to watch in bars - matches have ceased to be social events, they are purely TV shows. Can you think of any top-rated TV shows that are broadcast on weekend afternoons, especially during the summer? This is the “repeats of Celebrity Catchphrase and Midsomer Murders” slot for a reason.

Who wants to spend sunny summer Saturdays sitting at home watching empty-stadium football matches? There is no longer any good reason for these games to occupy that precious leisure-time real estate. It’s obvious that weekday evenings are now the best time for them: something new to watch at a time when it’s more likely you have nothing better to do. In fact they need not even be confined to the evenings - they could even be played on weekday afternoons, like in the World Cup, people can catch up with the highlights that evening, let the players have the weekend off as well, let them have a taste of 9 to 5 for once. This would be by far the biggest change in top-level football but it could have a big impact.

One thing the two-month suspension has not changed is that Erling Braut Håland continues to be very good. Twenty-nine minutes in he scored the first Bundesliga goal of the restart, finishing off a nice move: Hummels to Piszczek, who dribbled into midfield and passed to Julian Brandt, whose first-time flick found Thorgan Hazard, who knew that he only had to steer the ball past the first central defender and Håland would take care of the rest.

It was Håland’s 41st goal in his 34th match of the season, and the first goal celebration that has had to take account of the new social distancing protocols. He must have expected there was a pretty good chance he was going to score, and a different player might have planned some choreography in advance. Håland is not yet that kind of player. Within the context of the game he looks single-minded and purposeful as a shark, yet when the ball goes dead he again seems like he could be any slightly awkward and self-conscious 19-year-old. And so he ran to the corner, turned around, and began to perform a kind of dad dance as Brandt and Hakimi and Hazard stood in front of him clapping. The wider camera angles revealed that most of the team had run over to stand in front of Håland in formation, like a yoga class.

The last time Håland had scored at this stadium, both of his celebrations ended with him buried under a heap of ecstatic team-mates - though not before he had caused some unexpected controversy. He celebrated the first of his two goals in the 2-1 Champions League win over PSG by skidding into a lotus position, closing his eyes and lifting his hands in a meditative pose, holding it for a second before the other Dortmund players arrived to pile on. It was not the first time he had celebrated a goal this way but it was the first time he had done so against a team that included Neymar.

We do know that if there’s a 2020-21 edition of the Champions League, a lot of us will be tuning in to any potential meeting of Dortmund and PSG

By the time Dortmund came to Paris for the return fixture, Neymar had seen a fake social media screengrab in which Håland appeared to claim the city of Paris as his own. This, combined with the meditation celebration, apparently added up to an intolerable cocktail of provocation. When Neymar scored the first goal of the second leg, he celebrated by imitating Håland’s meditation pose - it was a behind-closed-doors game, but he was not going to allow the lack of an audience to interfere with the choreography. After PSG won the game 2-0, knocking Dortmund out, their entire team, led by Neymar, openly mocked the 19-year-old. Later Håland would do his best to seem unruffled, thanking PSG for helping him promote meditation to a worldwide audience. The “to be continued” was unsaid, but heavily implied.

Overall the episode was more like something out of The Last Dance than the Champions League, with Neymar no doubt seeing himself as the Michael Jordan figure, overreacting to some instance of disrespect from an inferior and proceeding to crush them. PSG and Jordan are commercial partners - Justin Timberlake makes a cameo appearance in The Last Dance wearing a PSG baseball cap - and in fact Neymar’s first marketing link-up with Jordan dates from 2016, a year before he moved to PSG. Of course, Neymar is no Jordan, not in any non-marketing sense anyway. This is the man who left Barcelona in order to avoid Scottie Pippen syndrome, only to realise too late that by joining PSG he had effectively demoted himself from the top level of the game, as though Pippen had tried to escape Jordan’s shadow by leaving the Chicago Bulls for Panathinaikos.

Watching The Last Dance you wonder if the worst part of Jordan’s legacy is not the sellout cynicism of “Republicans buy sneakers too,” but rather that he made millions of people believe that being a winner and being an asshole are kind of the same thing. Think of all the unnecessary pain and resentment and boredom that has been inflicted by the sort of people who think that by bullying and abusing their subordinates they are applying the same principles with which Jordan led the Bulls to six championships.

Yet it’s also hard to deny that the Jordan combination of skill, power, beauty and toxic masculinity is compulsively watchable. The interpersonal beef storylines sprinkled through The Last Dance don’t happen as much in football mainly because the game is too big - too much space, too many players on the field. Jordan could isolate and play man-to-man against opponents he wished to destroy; Neymar could not go up directly against Håland in this way.

But we do know that if there’s a 2020-21 edition of the Champions League, a lot of us will be tuning in to any potential meeting of Dortmund and PSG. And if football is looking for ways to draw fans into watching empty-stadium, TV-contract-fulfilling games, then there are good ideas to take from Jordan’s bad example. Preferably to be applied on weekday nights.

1 Sideline Cut: Vignette shows why Bird is the true shark in The Last Dance
2 Anfield and Cheltenham show sports again lacking in looking after their own
3 Federer named highest paid athlete of 2020 as Covid knocks Messi off top spot
4 Liverpool and Everton to oppose plans to play games at neutral venues
5 Brendan Rodgers says he was ‘really knocked’ by coronavirus
Real news has value SUBSCRIBE
Crossword Get access to over 6,000 interactive crosswords