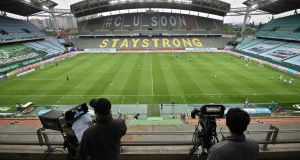 Drop everything people, the K-League is back.

The feverishly-anticipated clash between South Korean champions Jeonbuk Motors and Suwon Bluewings attracted a larger-than-usual international audience, as football fans around the world checked in on YouTube for a reminder of what the live game looks like, and to get a sense of what we might soon be watching in European leagues if the plans to restart come off.

The message “C–U–SOON – STAY STRONG” had been stitched in seats into the stand facing the cameras, and everyone in the press box was wearing a mask as they sat at their long desks surrounded by ample social distance.

The stadium announcer yelled his way through the pre-match formalities as though the stands were packed with a 42,000 capacity crowd, instead of draped with sponsored tifos.

Some of the players appeared to be laughing at how ridiculous he sounded, though it was hard to know for sure what the joke was. It took about two minutes into the game for the first on-field evidence of behavioural change, as the Bluewings’ Sulejman Krpic fouled Jeonbuk’s Hong-Jeong Ho, went to offer him a hand up in the traditional manner, then realised what he was doing, withdrew the hand and hovered near his fallen opponent, affecting concern.

A red card for the Bluewings on 75 minutes left them up against it and on 83 minutes Jeonbuk scored the winner, from a corner headed in at the near post by the 41-year-old substitute, former Middlesbrough striker Lee Dong-Gook.

The stadium announcer started to scream, a trance version of Seven Nation Army blared out as the players congratulated each other, and then some recorded crowd chants were piped into the empty stadium to mark the special moment.

With skilful camerawork largely hiding the stands from TV viewers, it looked and sounded almost like the real thing – though the celebration huddle dispersed quickly, and the high-fives were forearm-bumps, and then the taped goal-celebration chants came to an end and was replaced again by that cavernous empty-stadium sound.

All in all this was satisfactory football content, diverting enough for a game between two teams about which you neither know nor care. Any European TV executive watching this would have thought yes, behind-closed-doors can work, competition between good players is always watchable ... it’s a pity to lose the aesthetics of the backdrop – the noise, the chants, the flags – but these things turn out not to be essential.

Even the empty seats are not such a big problem. Usually the sight of them is toxic to people’s interest in a televised match, because it feels like a waste of time to watch a game that is apparently of little interest even to the people from the local area.

It changes the psychology when everyone knows the stadium is only empty because of the pandemic. There will be a group of matchgoing fans who protest that these games are a travesty of football, a cynical, uncanny and repellent exercise, zombie games staged simply to milk the TV contracts, but these are vastly outnumbered by those who only ever watch on TV and will be glad to have something new to watch.

The UK’s prime minister delivered a televised address last night, which in its frenetic delivery somewhat resembled the overexcited announcer in that empty K-League stadium

And yet any Europeans getting too excited about this need to remember the context in which the K-League has kicked off. In the 16 weeks that have passed since South Korea reported its first case of Covid-19, the country has suffered 256 deaths due to coronavirus.

Only 56 of these occurred in the 30 days leading up to the resumption of the football league, and there had been no cases of community transmission for several days nationwide, until a new cluster was detected out of Seoul’s clubbing district over the weekend.

Fifty-six deaths is currently one sunny afternoon’s worth of Covid-19 carnage in the UK. As for the goal of reducing community transmission close to zero, the UK’s prime minister delivered a televised address last night, which in its frenetic delivery somewhat resembled the overexcited announcer in that empty K-League stadium.

His government has unveiled a set of new two- and three-word slogans in the imperative mood, one of which even includes the word “control”. This has been a winning formula for him in the past and maybe it will be again.

In the meantime the facts on the ground keep threatening to sabotage the Premier League’s Project Restart. The Norwich player Todd Cantwell reacted to news that a third Brighton player had tested positive for the virus by tweeting “We are just people too”.

If footballers are just like the rest of the population of the UK then there exists a range of opinion among them on the question of whether they ought to get back to work as soon as possible.

There will be those who do not especially fear the virus and crave a return to normality – Kyle Walker or Jack Grealish might represent this constituency.

Sergio Agüero claimed that “most” players were in fact afraid to return, not so much for themselves but because of the risk they might pose to their families. There will be others who feel it is inappropriate to play while hundreds or thousands of people a day continue to become infected and die of the disease – a view expressed by Antonio Rüdiger.

There will be those who are suspicious of being used as “guinea pigs” by cynical corporate interests – Wayne Rooney has voiced this concern. There will even be a few of those who harbour insane conspiratorial views about the true sinister purpose of certain new communication technologies, vaccination programmes, and so on.

The one thing they all have in common is that their salaries depend on the TV deal, so the pressure on them to get together and generate some TV football content is only going to increase.

The Bundesliga recently provided an example of this pressure when the Cologne player Birger Verstraete gave an interview to Belgian TV saying he was worried about conditions in training and doubtful about the planned imminent return to action.

The remarks did not go down well with his club, who need to finish the season to collect all the TV money they’re due to receive. Verstraete quickly issued a statement distancing himself from his own comments: “Instead of giving an interview out of emotion, I should have contacted our doctor and had my questions answered.”

The return of football in the current circumstances feels like a bad idea, but we probably won’t be hearing much of that kind of talk from the people who will actually have to play it.

Ken Early: Another Mourinho masterclass in going through the motions 06:30
Game Changers: Stephen Cluxton’s indelible mark on Gaelic football 06:21
Peter Byrne: A gruff exterior hid the sensitive soul and warmth of Jack Charlton 06:16
Malachy Clerkin: Sleep well Jack, you made us all happy 06:00
Mark Lawrenson: Searing honesty and a sense of being in control defined Jack Charlton 06:39

1 Keith Duggan: Bubba Wallace tweet shows just how troubled Donald Trump’s mind is
2 Mark Lawrenson: Searing honesty and a sense of being in control defined Jack Charlton
3 Malachy Clerkin: Sleep well Jack, you made us all happy
4 Ken Early: Another Mourinho masterclass in going through the motions
5 Peter Byrne: A gruff exterior hid the sensitive soul and warmth of Jack Charlton
Real news has value SUBSCRIBE
Crossword Get access to over 6,000 interactive crosswords