How things stand, the big games, who to support and lots more 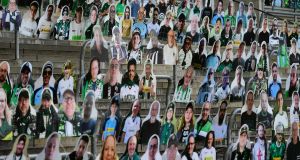 Borussia Mönchegladbach supporters have paid for cardboard cut-out portraits to be placed in the Borussia Park football stadium as the Bundesliga returns behind closed doors. Photograph: Ina Fassbender/AFP via Getty Images

So what’s the state of play in the Bundesliga?

Bayern Munich are four points clear of Borussia Dortmund and five ahead of RB Leipzig with nine rounds of matches left in the league. Borussia Mönchengladbach are in the fourth Champions League qualification place. The bottom two teams at the end of the season will be relegated while the club that finishes third last in the table faces a two-leg playoff game against the third-placed team in 2. Bundesliga (German football’s second tier competition).

Can I watch the Bundesliga matches live on television?

Yes, BT Sport will show all nine games live across the weekend, starting with Borussia Dortmund’s clash with Schalke on Saturday afternoon through to Werder Bremen’s game against Bayer Leverkusen on Monday night. They will also broadcast a Bundesliga Goals Show.

It’s fair to say that Bayern Munich are the dominant club in German football?

Yes, they are chasing their eighth title in succession and 29th in total. The Bundesliga started in the 1963-64 season – it was previously the German Championship – and only 12 clubs have won the title, none whose origins were in East Germany and none from Berlin.

What’s the big match of the weekend?

It’s the Revierderby between Borussia Dormund and Schalke. Only 32 kilometres separate the clubs in Germany’s industrial Ruhr heartland. It’s produced some interesting moments. In 1969, police with dogs tried to keep fans from spilling onto the pitch. A German Shepherd named Blitz became a little over-zealous and took a bite out of Schalke player Friedel Rausch.

Rausch, given a tetanus shot, was able to finish the game. It later transpired the dog did not belong to the police but had in fact been brought in by a Dortmund fan who had pretended to be a police officer to gain access.

Prior to the reverse fixture, Schalke president Günter Siebert went to the local zoo and managed to get hold of a lion for the day. He patrolled the pitch with the lion on a lead as fans saw the funny side of the incident earlier that season; fortunately the lion did not bite anybody.

So for whom should Irish people be cheering?

Well outside of those with an expressed preference for a team what about basing it on a nickname. A personal preference is for SC Freiburg, whose nickname (Breisgau-Brasilianer) translates as the Brazilians of Bresigau. It was bestowed on them in the 1990s when playing under the longest-serving manager in the history of German football, Volker Finke. The current Germany manager Joachim Löw was Freiburg’s leading all-time goalscorer (81) during three spells at the club until Nils Petersen eclipsed the mark.

There seems to be a significant issue for players ahead of the weekend?

I presume your referring to coming up with a suitable goal celebration – Duck Walk, Rock the Baby, Hi Ho, Conga etc – that adheres to social distancing. It’s certainly occupied the mind of Mönchengladbach’s Alessane Plea, who explained: “We’ve been speaking about celebrations. We can’t jump on each other, so we’ll do it differently. We’ll prepare a few little celebrations.” Good to know because as Roy Keane would say, “fail to prepare, prepare to fail.” It’s all about the detail.

Nope. They are six points adrift of the relegation playoff place and 10 from the sanctuary of 15th in the table that would preserve their status among the elite.

Yes. Originally an amalgamation of the TuS Schloss Neuhaus and FC Paderborn clubs in 1985, the club operated in the third tier of German football, Oberliga Westfalen, until their promotion to the Bundesliga in 2014.

They were relegated the following season, relegated again in 2017 and would have returned to the ranks of amateur football after a third relegation until TSV 1860 Munich failed to obtain a licence. From there they won promotion twice to get back into the Bundesliga this season. They might seek sponsorship from Hasbro, manufacturers of the board game Snakes and Ladders. At this stage their supporters must have travelled to every professional football ground in Germany.

They were once managed by German international midfielder Stefan Effenberg, who collected an all-time league record of 109 yellow cards at the time of his retirement in 2004.

What about the supporters in general?

There are none allowed, the matches will be played behind closed doors. Indeed there have been stern warnings that any fans that congregate outside grounds will risk the league being returned to cold storage.

No, I’m referring to the ‘fans’ at Borussia Mönchengladbach matches, what’s going to happen to them when the game’s over?

You’re talking about the offer that for €19, supporters can book cardboard effigies of themselves, which will be placed in the stands during matches. Fans of visiting teams can also avail of the initiative and they can ‘take their places’ in the away end of the ground. Mönchengladbach pioneered the scheme for the game against Cologne prior to the suspension of the league.

But your concern is valid about what happens to the cardboard cut-outs after the match finishes. Are they stored for reuse without any social distancing? What happens if ‘you’ only want to go to one match? Will you see your effigy floating down the local river or sitting in a bar or in a nightclub queue? And what about the children as RTE’s Tommy Gorman might inquire? How will they get ‘home’ or will they become a lost generation?

I couldn’t care less about the Bundesliga. If there was a match in the back garden I’d pull down the blinds. It’s live sport, be grateful.

1 Monica Seles: The warrior queen who could have been the best ever
2 The unsolved mystery of Goran Ivanisevic’s stunning Wimbledon win
3 Super Rugby AU offers glimpse of rugby’s future if law changes are adopted
4 Ryan Mason forced to retire from football after skull fracture
5 Christian Coleman defends himself after missing drugs test
Real news has value SUBSCRIBE
Crossword Get access to over 6,000 interactive crosswords