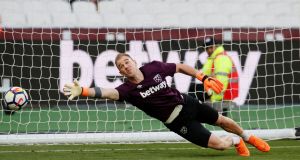 Joe Hart has been left out of the England squad for this summer’s World Cup. Photo: David Klein/Reuters

Jack Wilshere and Joe Hart have been omitted from England’s squad for this summer’s World Cup but there is a place in Gareth Southgate’s selection for Fabian Delph.

Wilshere has missed out after being called up for the friendlies against Italy and the Netherlands in March only to withdraw because of injury. The Arsenal midfielder, who has not played for his country since Euro 2016, started only 12 Premier League games in the season just finished and a historically fragile body may have counted against him given the demands of a tournament.

In leaving out Hart, Southgate has chosen to ignore his most experienced player. The Manchester City goalkeeper, who has spent the season on loan at West Ham, was told on Monday in a phone-call from the England manager that he would not be travelling to a fifth major finals despite Southgate having considered the 31-year-old his first choice for much of his tenure. Hart won his 75th and most recent cap against Brazil in November but Jordan Pickford and Jack Butland started the friendlies in March and have usurped him in the pecking order.

The suggestion had been Hart would still travel to the World Cup as an experienced third-choice – only Gary Cahill and Jermain Defoe of Southgate’s recent selections have more than 50 caps, with neither expected to make the cut for Russia – and would have been willing to fulfil that role, but his toils at club level appear to have counted against him.

He has endured an indifferent spell on-loan at West Ham this season, losing his place towards the end of November to Adrián and starting only 19 league games in total. He regained his place after a 4-1 defeat at Swansea in March, but there were subsequent high-profile errors against Burnley and Stoke. His last appearance was a 4-1 defeat at Arsenal on 22 April.

Burnley’s Nick Pope, who was called up for the games against the Netherlands and Italy but remains uncapped, is the likeliest to replace Hart in the 23-man squad, which Southgate will reveal on Wednesday.

Delph’s inclusion follows a season in which he has been successfully remodelled as a left-back at City by Pep Guardiola. The 28-year-old has been more naturally a central midfielder and brings versatility to Southgate’s squad.

The Burnley defender James Tarkowski, who has one cap, is understood to be on the standby list. Southgate is expected to select Phil Jones, John Stones and Harry Maguire as centre-backs, with Kyle Walker and Eric Dier also capable of playing there.

1 Level 5 golf shutdown: Ireland one of few countries to close courses
2 Disappointment and frustration par for the courses as golf goes into lockdown
3 Dan Martin toasting another stage win at the Vuelta
4 Shock at golf clubs as sport faces shutdown in Level 5
5 Philip Reid: Hard to find the sense in closing golf clubs
Real news has value SUBSCRIBE
Crossword Get access to over 6,000 interactive crosswords