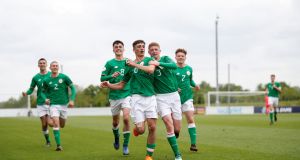 For the most part the recent battle over youth development in this country centred on the futures of the schoolboy clubs concerned, but out at Belvedere this week they have been wondering whether their past contribution was being quietly rewritten too.

You don’t have to be an ardent supporter of the old schoolboy system to acknowledge that the club has been remarkably successful at what it does since it originally displaced or subsumed a mix of existing teams in or around north inner city Dublin, some of which were sort of sporting wings of social organisations, back in 1971.

Belvedere dramatically raised standards when it came to the actual football but, like so many other clubs of all codes that operate in challenging or challenged environments, it still had to provide support structures for kids who needed them for one reason or another.

The system it was part of has it critics, some of whom would question the motives involved at the elite level clubs and whether the primary goal is to produce a well rounded person or a player with the potential to be a high level professional. But as in most sports, the coaches themselves tend to see the two as intertwined and there is understandable pride around Belvedere that more than 200 of the kids who have represented the club down the years have also played for Ireland at one level or another. Matt Doherty is just the latest to appear in the senior international team.

Troy Parrott has a fair way to go before he reaches that level but there is a sense among those who have dealt with him that he has the qualities required to keep progressing. His performances at the Under-17 European Championships certainly suggested that he has the talent and temperament to play on a big stage and at Belvedere they talk about a well adjusted kid who will avoid one of the most common pitfalls for young professionals . . . thinking they have made it a long, long time before they actually have.

The club, though, could be forgiven for feeling a little put out by the FAI’s profiles of the players involved in Colin O’Brien’s squad for the European finals. Apart from goalkeepers Kian Clarke and Jimmy Corcoran, who are listed as being with Shamrock Rovers and Cherry Orchard respectively, the rest of squad are currently signed to English or Scottish clubs and the association makes no mention of their origins.

Belvedere actually had connections to three of the squad’s players with Sean Brennan, now of Southampton, a regular in the Ireland side even though he missed Monday’s game against the Netherlands, and Oisin McEntee, who took over from Corcoran for the final retaken spot kick, having also had a spell there.

In Parrott’s case the scale of Belvedere’s contribution towards shaping the young player’s career seems to be beyond dispute. The 16-year-old hails from an area that has produced more than its fair share of good footballers - Wes Hoolahan, Keith Treacy and Thomas Butler all came from within a stone’s throw of the family home he left in order to join Tottenham - but years of decline and underinvestment mean that many of the area’s kids never get the chance to realise anything like their full potential.

Endearingly, Parrott talks about his relentless desire to be out on the street or in a park with a ball at his feet. But being a young Dublin lad out on the city streets with time on your hands doesn’t always end well and the player’s family, like so many others, have faced their share of challenges. Those who know them speak with admiration for the way Troy’s mother has looked after his best interests and the young player himself has reacted so positively to the guidance provided.

His character, it is suggested, is one of the key assets he has taken to Spurs in a move accelerated slightly so as to get him into an environment in which he better placed to make the most of his talents. Martin O’Neill spoke last week about how well regarded he is at the club where they have already had him up to train with the seniors. The quality of some of his goals in the Under-18 league team, as well as for Ireland, strongly suggests that things are coming along pretty well.

It is a pity that he won’t have more an opportunity to enhance his reputation in the closing stages of the European Championships, although Ireland were perhaps not quite as harshly done by as was suggested in one or two quarters. Opinions differed slightly between a couple of referees who expressed an opinion on the sending off in the wake of the incident, with a Dutch official who blogs suggesting that maybe Corcoran should not have been adjudged to have come off his line. One referee here felt the wording of the rule meant that leaving a trailing foot behind him as he pushed forward wasn’t enough to get him off the hook.

Once the assistant referee indicated that he was guilty of an infringement (which he did), though, the young Czech match official had no option given the way the way the current rules stand but to hand Corcoran his second yellow - not if wanted his own international career to progress.

Generally, the game has been made a lot better in recent years by some of the rule changes introduced and while not everything works out as expected, it is good that they keep on trying to tweak things. What Monday showed, though, is that the old regulation which gave the referee the discretion to book a goalkeeper for persistent breaches of the rule was better than one that obliges him to issue a caution for one transgression.

It was harsh on Ireland but the Dutch go on and good luck to them. There have, despite suggestions to the contrary, been greater injustices in the history of the game than the manner of the Irish team’s exit the other night. Yet when the dust settles and the tournament is being reviewed, the incident will hopefully be recognised as a slightly shameful way to treat a 16-year-old doing his best to represent his country.

It would not be of much consolation to Corcoran but the rule should be changed again to ensure he is the only one to suffer that fate.