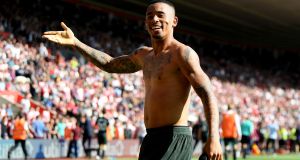 How fitting that Manchester City would finish an extraordinary season with a bang. Gabriel Jesus, a substitute here, hoisted a wonderful dinked effort into the net with only seconds of the Premier League season left after meeting a flighted Kevin De Bruyne ball to earn the champions’ 32nd win of the campaign, attaining a landmark and record-breaking century of points in the process.

Jesus ran to the delirious away supporters, mobbed by his team-mates. For so long, it looked as though City would end the season on something of a bum note but this was a timely reminder that Pep Guardiola’s side are no ordinary team. For Southampton, this was the end of an enormous week, in which they secured their league status after victory at Swansea on Tuesday.

Mark Hughes said that his staff would keep one eye on events in south Wales but only disaster could have relegated Saints, with Swansea unable to muster up victory or the unimaginable 10-goal swing needed. That mission impossible was over by half-time – and not just because Stoke City were leading at the Liberty Stadium.

Southampton were largely at leisure, in control for large spells and the defender Wesley Hoedt, of all people, had twice gone close. Inside eight minutes he rattled Claudio Bravo’s crossbar from Dusan Tadic’s inswinging corner before firing against the side-netting. Charlie Austin also had a sight of goal but his effort was relatively tame while Oriol Romeu shot ambitiously from distance. Manolo Gabbiadini, the hero in midweek, was serenaded as he limbered up on the touchline. It was that kind of afternoon. This was the most relaxed Southampton had felt all season long, finally at ease after a season of misery.

As for City, who flew down from Manchester on Sunday morning, they never really got into their stride. They were limited to half-chances. De Bruyne wrapped his right foot around a delicious free-kick a few minutes into the second half, with John Stones inches from connecting at the back post. The returning Raheem Sterling led the line in the continued absence of Sergio Agüero but City never truly possessed that killer instinct. Leroy Sané slid a cross into an empty box before the ball ricocheted towards Fernandino, lurking near the penalty spot, only for the Brazilian to drive harmlessly over. Guardiola, sleeves rolled up, stalking his technical area, acknowledged something had to change and soon after Jesus would enter, in place of Fabian Delph.

City had come alive with Sterling striking the post before Stones’ header from De Bruyne’s corner forced another fine save out of the increasingly impressive Alex McCarthy. It was Southampton who perhaps squandered the best chance late on, though, with Fernandinho clearing off the line after Tadic, who had beaten the offside trap, twice skirted around Bravo, the Manchester City goalkeeper frantically scampering around his box. Brahim Díaz and Phil Foden made their fifth league appearances of the season – ensuring them Premier League medals in the process – before Jesus popped up to finish an unforgettable season in considerable style.