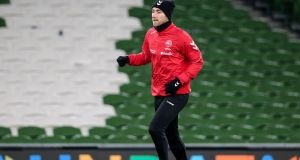 The Republic of Ireland are one home victory away from securing their place at next summer’s European Championships. Sounds pretty straightforward, doesn’t it?

And for Mick McCarthy’s men, their assignment is simple. Beat the Danes, and they’re in the Euros. For the visitors, they know a draw will be enough to see them through.

The second coming of McCarthy hasn’t exactly been a thrill a minute - Ireland have managed just six goals in seven qualification fixtures - but he is just 90 minutes from completing the job he was brought back to do.

One of the great nights in Irish football history could be ahead of us - here is everything you need to know.

The match takes place on Monday, November 18th at the Aviva Stadium in Dublin (kick-off 7.45pm). It's worth noting Lansdowne Road DART Station will be shut between 5.30pm and 11pm on the night, meaning supporters will need to get off at Grand Canal Dock or Sandymount. This is due to a trial exercise ahead of the four Euros matches being held at the Aviva next year.

RTÉ 2 will be showing the match, as always (coverage starts at 7pm), but if you fancy a change you can also watch it on Sky Sports Mix - the broadcaster’s free-to-air sports channel. Sky Customers can find Sky Sports Mix on channel 407, and Virgin customers on channel 507.

And, of course, you can also follow it via the Irish Times liveblog, which will be live from the Aviva Stadium from around 7pm onwards.

The fixtures were relatively kind to Ireland, who were able to ease themselves into their qualification campaign with back-to-back wins over Gibraltar and Georgia. Shane Duffy then salvaged a point in Copenhagen before another comfortable Gibraltar win and a draw at home to Switzerland. However, the wheels came off a bit during the last international window, where a dull goalless draw in Georgia was followed by a 2-0 defeat in Switzerland - meaning it all rests on Monday night.

For once, it’s relatively straightforward. Denmark currently top the group on 15 points, with Ireland in third place on 12. Victory for the hosts would move them level with the Danes, and they would then qualify by virtue of their superioir head-to-head record.

A point will guarantee Denmark’s qualification - but in theory they could still make it to the Euros if they are beaten. However, that would require Switzerland to slip up in their final fixture, which is away to Gibraltar. Chances? Slim.

Shane Duffy will captain Ireland on Monday night, in the absence of Seamus Coleman. In theory, Coleman’s absence is a blow, but it makes McCarthy’s life easy when it comes to selecting his fullbacks, with Matt Doherty set to slot in on the right.

Last Thursday’s friendly win over New Zealand won’t have changed McCarthy’s plans too much, although Seán Maguire or Callum Robinson could find themselves starting in a front three alongside David McGoldrick and James McClean. However, Emmet Malone suggests Callum O’Dowda could be the man who gets the nod.

As for the Danes, their key man needs to introduction. Christian Eriksen has endured a poor start to the season with Tottenham Hotspur but he remains the fulcrum of this Denmark side and will be comfortably the most talented player on the pitch on Monday night. Neutralising him will be key to Irish hopes.

To put it bluntly, these two sides must be sick of the sight of each other by now. This will be ther sixth meeting since November 2017 - with the tally currently standing at one win for Denmark, and four draws. Three of those have been goalless - this fixture isn’t normally a thriller.

The one anomaly was, of course, Ireland’s 5-1 thrashing in the play-offs for the 2018 World Cup. An Eriksen hat-trick helped eviscerate the hosts in Dublin following a first leg 0-0 draw in Copenhagen. Revenge would be sweet.

While three points for Ireland would guarantee their place at the Euros, a draw or a defeat doesn’t necessarily mean their qualification hopes are over.

If they miss out on one of the two automatic qualification spots in Group D, Ireland still have a chance of making it via the play-offs next March. The play-offs are decided by performance in the Uefa Nations League, with Ireland now guaranteed one of 16 places on offer.

In order to reach the Euros vis the backdoor Ireland would need to win a one leg semi-final and then a final. This week’s final round of qualifiers will decide their potential opponents, with the draw held on Friday.

Failure to beat the Danes wouldn’t be curtains - but it would be a lot simpler for all concerned if Ireland win.

Any cheap flights to Bilbao?

So how do these play-offs work exactly?...